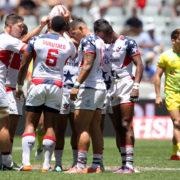 Brett Thompson has been replaced in the Men’s Eagles Sevens’ HSBC Wellington Sevens squad by Pago Haini – on debut – due to an injury sustained in New Zealand.

Head Coach Mike Friday’s team was given one of the toughest pool draws for the tournament in New Zealand following a Fifth-Place Semifinal appearance at HSBC Cape Town Sevens, from which the U.S. gained 10 points towards the Series standings. The home-town All Blacks Sevens squad headlines the Eagles’ Pool B along with France and Samoa. Tournament kickoff is scheduled for Friday night U.S. time, with the live broadcast available to American viewers on World Rugby’s Sevens Series website.

Friday and captain Madison Hughes returned home following the opening leg of the Series – Emirates Airline Dubai Rugby Sevens – after a long, two-year stretch that included the circuit, qualifying for and competing in the Olympics, and XVs duties without much time away from the field. Chris Brown and Perry Baker, respectively, assumed responsibility for the aforementioned roles in Cape Town.

Fourth on the Series last season and fifth in Dubai – despite five of 12 players in the squad new to the circuit – Australia went into pool play in South Africa with hopes of a similar performance. The Eagles, on the other hand, carried a Dubai Challenge Trophy and momentum into Pool A, where they responded to early Aussie pressure with three unanswered tries in a 19-0 shutout victory.

South Africa – Cup Champion in Dubai and eventual runner-up at its home tournament – did not allow an early U.S. lead to stand for long in a 28-10 win. The Eagles finalized qualification for the Cup with a nine-point defeat of Russia before an overtime loss to Scotland in the Quarterfinals preceded a defeat to Rio 2016 Olympic Summer Games gold medalist Fiji.

Folau Niua and Stephen Tomasin complemented each other in the playmaking roles in the absence of Hughes – and combined to send more than half of the team’s conversions through the uprights – while the Eagles’ success rate on the restarts was one of the best in the entire competition, according to one source. The trio of Baker, Danny Barrett, and Maka Unufe could singlehandedly nullify an opposing team’s restart lift, and helped set away the Eagles’ offense.

Unufe was not selected for the upcoming legs in Wellington and Sydney, but Friday’s midfield has Series experience and know-how in Martin Iosefo and Niua. Iosefo is tied with Barrett on four tries this season – third-best on the team behind Baker (10) and Tomasin (6) – and brings an additional physical presence along with quick feet and hands. One of the Eagles’ most imposing threats, Andrew Durutalo, missed the entirety of last year’s Series due to professional XVs commitments, but has made himself available to the sevens program for the 2016-17 season.

Connor Wallace-Sims was a late call-up to the squad as Kevon Williams of two caps was injured in training at the Chula Vista Elite Athlete Training Center. He and Don Pati constitute the newest members of the team and the success of the domestic pathway, with the former rising through the All-American ranks while training at USA Rugby National Development Academy Northeast Academy.

Good news for the Eagles – not so much for the circuit – is the return of Carlin Isles to the squad. Absent from the Series since 2016’s Las Vegas tournament, Isles is still regarded as the “Fastest Man in Rugby,” and led the Olympics in try-scoring in just five games. Only recently surpassed in the U.S.’s all-time try-scoring table by Baker, he is one of the most-capped Americans on the circuit. Isles and Brett Thompson – also returning from injury – have combined for 47 tournament appearances since their debuts during the 2012-13 season.

Since reaching the medal round in Rio and being subsequently bounced from contention by Japan, France – like several teams on the circuit – has struggled to find its form thus far. Though Les Bleus won the Challenge Trophy in Cape Town, knockout wins over Russia and Argentina were less than convincing following blowouts of Canada and Japan. Captain Terry Bouhraoua has again been the driving force behind France having scored a Series-leading 107 points, and will have to help acclimate 18-year-old debutante Pierre-Louis Barassi in Wellington.

The New Zealand faithful will not be far from ex-All Blacks Sevens head coach Sir Gordon Tietjens in Wellington, as the former lead man begins his tenure with Samoa at Westpac Stadium. The disappointment of the three-point loss to Spain that cost a place at Rio could have been haunting Samoa in the opening legs of the season, accumulating just four wins and eight standings points in 12 matches. The Eagles compounded the team’s problems by snatching the Dubai Challenge Trophy, but will not overlook their second pool opponent ahead of the clash with New Zealand.

Not only is this weekend’s tournament hosted in New Zealand, it has also been won by the home side three years running. Of the four current Series locations with a home team in the competition – Australia, England, New Zealand, and South Africa have each hosted at least 16 Series stops – the Kiwis have secured the most Cup victories on home soil (nine of 18 tournaments; South Africa is the next-best with four wins from 18 tournaments). The loss of their longtime head coach has seen results drop below the expected standard in the first two legs, while a set of four athletes new to the Series in all black should add a bit of unfamiliarity to Pool C.

“We are in one of the pools of death in Pool C, what will be a hugely physical pool,” Friday said. “We will need to first be up for that challenge. We have worked hard on our decision-making in the contact area, although I want to see improvements in our fundamentals of pass-catch and our decision-making when offloading, as that is predominantly why we did not progress further in the first two legs.

“We are also in a better physical condition and a little more settled as a squad.”

The Eagles maintained their eighth-place standing between Dubai and Cape Town, and could jump into seventh beyond Australia should they place higher than next weekend’s HSBC Sydney7s host. Viewers in the United States will be able to watch Wellington Sevens live via World Rugby’s website stream. The U.S. gets started with a 7:18 p.m. ET kickoff against France Friday, Jan. 27. The final pool match begins at 3:02 a.m. ET, with knockout play picking up around 5 p.m. ET Saturday.