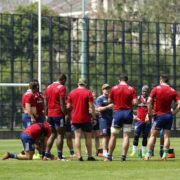 With a fourth-place result at the last stop, HSBC Canada Sevens, the Men’s Eagles Sevens earned the highest seed in Pool D in Hong Kong, where they will play Argentina, Russia, and Scotland ahead of the knockout rounds. Fans in the United States can watch the three-day tournament on World Rugby’s Sevens Series website, with the U.S.’s first match scheduled for Friday at 7:08 a.m. ET.

For the third consecutive season, Head Coach Mike Friday’s squad played in front of its home crowd at HSBC USA Sevens in a Bronze Final. Losing only to second-place England and Series leader South Africa, the Eagles came from behind to defeat perennial rugby powerhouse New Zealand to leave Las Vegas with a medal around their necks.

While bruising, skillful forwards like Danny Barrett and Ben Pinkelman took advantage of a slimmer playing surface at Sam Boyd Stadium, speedster Perry Baker was unleashed in Vancouver as the U.S. led the circuit in tries scored over the course of the two rounds in North America. The wing, missing strike partner Carlin Isles to a season-ending injury, kicked off the tournament with a hat trick of five-point scores in a 52-0 shutout of Japan.

The Eagles responded well to the challenge put forth by France as pool play continued, and manhandled a highly-ranked Australia side – not for the first time this season – to earn the No. 1 seed from their pool. Matching up with Argentina in the Cup Quarterfinals as they did in Las Vegas, the Eagles regressed slightly in their performance, highlighted by Friday after the match. Danny Barrett was shown a yellow card for the first tackle of the game, resulting in a three-match suspension that will carry over into the first clash in Hong Kong.

Argentina’s early lead from Barrett’s sin-binning was short lived, though the Eagles’ South American counterpart did take a 12-7 lead into halftime. In his last action of the tournament, Barrett dotted down for the match-winning, 14-12, try, setting up a second consecutive Cup Semifinal match with South Africa. Baker was kept from the try zone in one of the closest matches the U.S. has ever played against the standings leader, and Friday will perhaps count his squad unlucky and a tad impatient to not have taken a lead as the seconds ticked down on the scoreboard. Rio 2016 Olympic Summer Games gold medalist Fiji handed the U.S. just its fourth defeat in 12 matches to earn the sixth leg’s bronze medal.

Despite the indiscretion in Vancouver, Barrett has been one of the consistent stand-out performers for Friday’s Eagles this season, and was recognized in the Las Vegas Dream Team. Prior to traveling north of the border, he was leading the team in tries scored with 16. Baker, however, received the accolades in Vancouver, scoring a tournament-high nine tries – including his 100th career try in his 25th appearance – for a Dream Team selection.

More so than any of the back-to-back sevens weekends on the circuit, the North American rounds take a unique toll on the body. Artificial surfaces at both Sam Body Stadium and BC Place Stadium have less give than the natural grass that fills the majority of the stadia utilized on the Series. Because of this, players were allowed to wear forms of protection in Vancouver, and few injuries were reported as a result.

Captain Madison Hughes was a beneficiary of the part-time rule, saying later he may not have been cleared to play had he not worn compression pants. While the 12 Eagles that played in Canada were all healthy for selection in Hong Kong, there was competition for places at the March High Performance Camp. Mike Te’o returned from a successful Americas Rugby Championship campaign with the Men’s Eagles to reclaim a spot in the team – for which he last appeared on the circuit during the 2013-14 season. The high-flying back looked like a sevens player for the XVs side, scoring four tries and menacing opposing defenses from the full back and wing positions.

Russia enjoyed its best-ever result on the Series at HSBC Sydney7s, where the Bears set the Eagles back in pool play. The Challenge Trophy triumph did little to improve the team’s confidence, however, as it bowed out of both American legs in the respective 13th-Place Semifinals. Danger man Vladislav Lazarenko was one of three try-scorers when Russia last beat the Eagles, and leads the team in scoring with 50 points.

No team has seen the kind of mixed results Scotland has this season. Last year’s London gold medalist kicked off the year with three consecutive trips to the Cup rounds – which included fourth- and third-place finishes in Cape Town and Wellington, respectively – before more-than-disappointing results in the three most recent tournaments (tied for last in Sydney, Challenge Trophy Semifinalist in Las Vegas, and Trophy Quarterfinalist in Vancouver). The Eagles have matched up with Scotland during its positive portion of the season, losing two matches in pool play.

The Eagles are set to face Argentina for the fourth consecutive tournament following the North American Cup Quarterfinals and a Sydney-opening pool matchup. All three were wins for the U.S., but none were by more than three points. Argentinian young guns Bautista Delguy and Luis González did not travel with the team to Asia, where several XVs stars will make their return to the sevens program. While the collective experience level will rise, none of the players in the team have been on a winning Argentina side in matchups with the U.S. this season.

The Hong Kong and Singapore legs of the Series may not be the most accommodating to viewers in the United States, but both tournaments will be available to stream live via World Rugby’s website. An early start for Day One Friday, April 7, will be followed by a late-night kickoff for the second round of pool play into Saturday morning, April 8. Live match updates will be provided on Twitter by USA Rugby (@USARugby) with match recaps posted to USARugby.org.