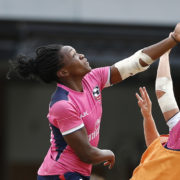 LAS VEGAS – The USA Falcons are out of contention for the Las Vegas Invitational’s “Women’s Elite 7’s Division” title following a 19-17 defeat to Tribe in the Cup Quarterfinal Saturday.

Emilie Bydwell’s developmental team had qualified for the Cup round with a perfect 3-0 record in Pool A. The Falcons finished off pool play Saturday morning with a 32-0 shutout of Stars Blue, condemning the touring side to its third defeat in as many matches at Silver Bowl Fields.

Tia Blythe, who toured with the Falcons to Japan last month, scored two tries in the victory, while Sylvia Braaten, Cheta Emba, and Ashley Perry followed up tries on Day One with dot-downs against Stars Blue. Cassidy Burgell scored her first try of the tournament in the win, as well, while Megan Foster successfully kicked one conversion.

Braaten and Emba continued their scoring streaks in the knockout rounds, but failure to convert five points into seven points on two occasions allowed Tribe to emerge victorious. The Falcons will play for the Plate with a Plate Semifinal matchup against Ravens scheduled for 12:20 p.m. ET.

Bargell, 17, is the youngest Falcons on the team, with University of Michigan’s Alena Olsen, Central Washington University’s Nate Serevi, and University of Central Florida’s Jessica Warner all under the age of 22. The youth will serve the Women’s Eagles Sevens well in this second Olympic quadrennial, gaining experience on tour as well as in training with Eagles Head Coach Richie Walker’s player pool.

“We had three days at the [Chula Vista Elite Athlete Training Center] where everyone was mixed in with each other,” Bydwell said, referring to the 24-player camp preceding the weekend in Las Vegas. “We were able to get them up to speed pretty quickly. They understand everything conceptually and tactically, so now it’s being on the field and adjusting.

“That’s what’s good about a tour like this: they can take time getting used to reacting to the pictures in their head before going into a stadium. It’s really exciting for me, especially, with where Richie and [assistant coach] Andrew [Locke] are in their cycle.”