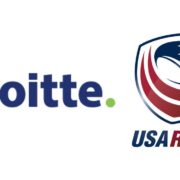 NEW YORK – Deloitte announced today that it is an official sponsor of USA Rugby, the national governing body of the sport of rugby in the United States.

“Deloitte is very excited to sponsor USA Rugby in this historic moment in the organization’s history,” said Jonathan Copulsky, Principal and Chief Marketing Officer, Deloitte Consulting LLP. “When the game of rugby sevens debuts at the Rio Games, the world will see the values that the nation’s best players bring to the game, including respect, integrity, commitment to excellence, and teamwork. These are values that Deloitte shares, and we look forward to supporting the USA Rugby men’s and women’s teams on their journeys to Rio.”

The Rio Games will mark the debut of rugby sevens, a variant of rugby in which teams are made up of seven players instead of the usual 15. This is the first appearance of the sport since rugby union was removed from the program after the 1924 Games. Team USA is technically the defending champion of the Olympic gold, though the format has shifted from the version of the sport staged more than 90 years ago.

“We are thrilled to have Deloitte join the USA Rugby family as a sponsor,” said USA Rugby CEO Nigel Melville. “Sponsors like Deloitte help our team compete globally and strive for excellence. Deloitte’s support will help position USA Rugby’s men’s and women’s Eagles Sevens for success on the international stage.”

Both the men’s and women’s teams are in the midst of Rio 2016-qualifying campaigns in the World Rugby HSBC Sevens World Series and World Rugby Women’s Sevens Series, respectively. Qualification can also be sought through the 2015 NACRA Sevens Championships on June 13-14 in Cary, North Carolina, at the culmination of the 2014-15 campaigns.

Deloitte has been a proud sponsor of the U.S. Olympic Committee (USOC) since 2009, providing professional services that help enable Team USA to successfully compete on the global stage. As a trusted advisor, Deloitte has worked to help shape long-term strategy and improve operational efficiency for the USOC.

Founded in 1975 and currently headquartered in Boulder, Colorado, USA Rugby oversees four national teams, multiple collegiate and high school All-American sides, club rugby unions, and the sport’s emerging Olympic development pathway for elite athletes. The organization has more than 115,000 active members and is a Full Sport Member of the USOC and the International Rugby Board (IRB).

Deloitte provides industry-leading audit, consulting, tax and advisory services to many of the world’s most admired brands, including 80 percent of the Fortune 500. Our people work across more than 20 industry sectors to deliver measurable and lasting results that help reinforce public trust in our capital markets, inspire clients to make their most challenging business decisions with confidence, and help lead the way toward a stronger economy and a healthy society.

Deloitte is proud to sponsor the USOC. Deloitte and the USOC share common values such as leadership, integrity, commitment to teaming, strength through diversity, and global perspective. We support the USOC through our professional services to achieve its long term mission in support of Olympic and Paralympic athletes. As used in this document, professional services means audit, tax, consulting and financial advisory services. To learn more about Deloitte’s USOC sponsorship, visit www.deloitte.com/us/olympics.