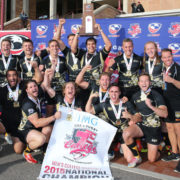 DENVER, Colo. – Three years after claiming a Division 1AA National Championship in 15s, Lindenwood University won its first-ever Division I title – this time in sevens. The Lions used a dominant second-half performance to down Mid-South Conference foe Davenport, 28-10, in the Cup Final of the 2015 USA Rugby College 7s Men’s Division I National Championship.

Playing on the front foot early, Lindenwood received an unexpected chip and chase for a try from forward Sebastian Kalm to open the scoring of the Championship Final. Kalm’s soft tough and accurate placement allowed for the big senior to dot down under the posts and give Mikey Bateman the easy conversion opportunity – a theme that would stick with the Lions through the two 10-minute frames.

Down, 7-0, and playing inside Lindenwood’s 22-meter line, Davenport struggled to find enough space to get near the line until AIG Men’s Collegiate All-American JP Eloff dummied a teammate and sprinted for the corner for his fifth try of the weekend.

Following the conversion attempt from Eloff that sailed wide, Davenport did well to continue to apply pressure on Lindenwood deep in the Lions’ end. Unfortunately for the Panthers, the beneficial field position didn’t yield any more points before the halftime buzzer.

With each team staring down 10 more grueling minutes of sevens rugby, and doing so at more than 5,000 feet above sea level at the University of Denver, it was Lindenwood that seemed to catch its breath a bit quicker during the intermission.

“Playing 10-minute halves is kind of daunting when you’re in the first half, knowing that you have 20 minutes to go,” said Lion Mickey Bateman. “But we had a talk at halftime and our coaches told us to have a crack at it and we did. We came out on top of a couple of one-on-ones and got under the posts.”

In fact, Bateman, who was later named the Dave Sitton Most Valuable Player, needed less than two minutes after the second half whistle blew to dive under the posts and regain the lead for Lindenwood. The New Zealand-born half back’s try was followed by scores from teammates Kolton Nelson and Reed Cameron, which helped lead the Lions to a 28-13 win.

For Davenport, the 13-point loss and runner-up finish leaves a sour taste on an otherwise brilliant weekend.

“Good job on Lindenwood’s part,” said Eloff after the Final. “I think they wanted it more, but I’m proud of our guys. We stepped up every game and we fought every minute of every game.”

The loss also marked the final game for Eloff and a host of influential seniors who guided Davenport from a brand new D1AA team to an elite D1A program.

“We leave the program in good hands,” Eloff added. “These young guys have all stepped up, and I know they will be ready to take on more responsibility next year.”

In other action from day two’s knockout rounds, Bowling Green recovered from back-to-back losses to close day one by winning the Shield trophy with a 14-12 win over Texas A&M.

Wisconsin added to its hardware collection, which includes a D1A Rugby Big Ten Universities Conference Championship from the fall, by earning the Bowl with a 29-7 defeat of Central Florida.

In the Plate competition, it was Saint Mary’s College who took home the trophy in the end. After a shocking upset at the hands of Utah in the Cup Quarterfinals, the Gaels took their frustrations out on Cup contenders American International College and Arizona State.

The thrilling National Championship victory by Lindenwood, as well as the Cup Final from the Men’s Division II and Women’s ranks, will be aired on ESPN U Monday, May 25 at 9 p.m. MT.