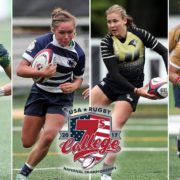 The Men’s Division I bracket will kick off this year’s College 7s National Championship event Friday, May 19, while the women will sink their teeth into championship rugby beginning May 20 and the action will continue onto Sunday, May 21.

Every match from the 2017 USA Rugby College 7s National Championships will be broadcast live on The Rugby Channel.

Lindenwood’s impressive results earned the team an appearance in the 2016 Cup Final where the Lions fell to Life, 10-0, to finish second. Based on the team’s 15s season, Lindenwood appears to be an even stronger unit. Team USA Olympian Richelle Stephens is one big reason why the Lions are expected to bring an improved squad to Colorado.

The women of Dartmouth will be making their first College 7s appearance after taking first place in the Ivy League’s 15s competition and winning the NIRA 7s title. Mean Green Head Coach Katy Dowty has international experience in both codes, and brings a talented roster to the field.

Montana State went 4-1 in last year’s Division II National Championship tournament. This year the Bobcats will be up against the very best in women’s college rugby, but the program’s steady progression in just a short amount of time has it looking capable of an upset of two.

The Aggies are in fine form after claiming their second consecutive Spring Championship. Furthermore, UC Davis is no stranger to the Olympic code of rugby. The Spring Champion went 2-3-1 at the 2016 College 7s event, but its three losses were against the likes of Central Washington, Lindenwood, and Penn State.

The only team from Pool B that is not returning from the College 7s National Championships is Michigan, but the Wolverines look ready for the challenge after winning the Big Ten’s series of sevens tournaments.

An upset at the hands of Stanford in the Cup Quarterfinals ended Central Washington’s chances of returning to the Cup Finals after reaching the main event of the 2015 College 7s National Championships. All-American Asinate Serevi will miss the event due to injury, but danger-woman Cassidy Meyers will bring her usual experience and playmaking ability to Infinity Park.

Life does not have an easy road to navigate towards a repeat title in sevens. The field around the Running Eagles is much stronger, but the 2016 National Champions return the likes of Kaitlyn Broughton, Madison Ohmann, Megan Rom, and Christina Swift.

Texas A&M limped through a winless tournament last year at College 7s, but their domination through a series of Lone Star sevens tournaments have the Aggies looking like a legitimate contender in 2017.

Winners of the past two Division II National Championships in 15s and last year’s Women’s DII title in sevens, Davenport is more than ready to test itself against college rugby’s best. The Panthers’ talented roster can beat opponents with speed with the likes of Danielle Ordway, or can overpower teams with players like Brenna Donahue.

Penn State’s push for a second consecutive National Championship in sevens came to an end when the Nittany Lions lost to eventual champ Life in the Cup Semifinals. Fresh off of another D1 Elite National Championship in 15s, Penn State rolls into Glendale with confidence. The team has no weaknesses in its lineup, and each Nittany Lion is capable of playing multiple positions.

The women of West Point could make a deep run in their first College 7s National Championship appearance. The Black Knights reached the Finals of the NIRA 7s Championship where they lost to Dartmouth by a converted try.

Princeton brings a 2017 sevens record of 9-4 into the championship weekend. Most recently, the Tigers reached the Finals of the Navy 7s tournament, but lost a nail-biter to the hosts by just two points. The Ivy Leaguers are not ones to sleep on, either. Princeton did not compete in last year’s College 7s National Championships, but reached the Cup Semifinals in 2015. Only a loss to eventual champion Penn State kept the Tigers out of the Final.