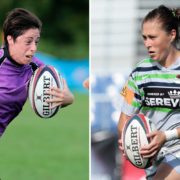 Last year’s Seattle Saracens squad won all of its matches at Nationals – except those played against American Rugby Pro Training Center. After falling to ARPTC in pool play, Seattle’s second-half comeback fell four points short against the National Development Academy in the 2015 Cup Final.

Many familiar faces have regrouped for another crack at a sevens title. One Sarrie that will not be available this weekend is Ryan Carlyle. After playing a huge role in Seattle’s run to the Cup Final in 2015, Carlyle just wrapped up her efforts in helping the Women’s Eagles Sevens finish fifth at the Rio 2016 Olympic Summer Games.

Fortunately for Seattle, Carlyle is not the only Saracen with international experience. Ashley Kmiecik and Kelsi Stockert have patrolled the wing for the Eagles, and are two of the better ball-runners in the club scene. Additionally, Anne Peterson and Caroline White bring great ball-handling skills to the side, and Kristin Sommer – the team’s captain in 15s – is a go-forward threat that opposition will need to contain.

Chicago Lions and Yougbloodz have had a stranglehold on the Midwest’s seeds to Nationals in recent years, but the Chicago Griffins set out to change that this summer and accomplished their goal. After a slow start to the summer, the Griffins came on very strong by winning the final two Midwest qualifying tournaments, including the July 30 Midwest Championship.

This weekend will be the Griffins’ first time playing at a Club 7s National Championship, but that does not mean the team does not have Championship experience within its roster. Brittany Biedenbender, Lizzy Bristow, Brittany Klimek, and Lauren Trout have all played on sevens’ biggest domestic stage with the Chicago Lions.

No women’s team has made more appearance at Club 7s National Championships than Northern Virginia Rugby. While NOVA continues to be a threat on the National stage, 2015’s sixth-place performance at Nationals was the club’s worst finish at Nationals.

A group of talented players that pushed NOVA to a second-place finish in the Mid-Atlantic competition appear to have what it takes to get the team back to the Cup Quarterfinals. Nicole Benedetti and Bri Kim are former AIG Women’s Collegiate All-Americans that have proved to be just as dangerous in the club division.

Boosting NOVA’s 2016 roster is a pair from University of Virginia. Francesca Beller and Joy Jefferson were two of the best in the back line for a Virginia team whose season did not end until a loss to UC Davis in the Division I Spring Championship match.

Adding a physical presence to NOVA’s roster is Ariel Johnson. The former Collegiate All-American is a tenacious tackler, and will be making her incredible return to Club 7s National Championships fewer than 13 months after being diagnosed with cancer.

Boston Rugby made its first Club 7s National Championship appearance in 2015. Unhappy with its 16th-place finish last August, the Atlantic North side survived a tough draw at Saratoga 7s to finish second in the region and earn a shot to redeem itself from last year’s 0-6 performance in Iowa.

It is an almost certainty Boston will be better prepared for the 2016 Championships. Over half of the squad from last year’s team returns to Nationals. Included in the list of returnees is Tara Roberts, who led the team in tries at the 2015 Club 7s National Championships.