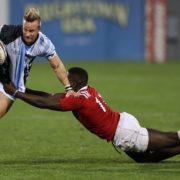 Austin Huns Rugby Club will host the 20th annual Bloodfest 7s Tournament Saturday, June 17, in Pflugerville, Texas, benefitting We Are Blood. We Are Blood is Central Texas’ leading blood and tissue center and has been partnered with the Huns since the inception of the event.

Bloodfest is boasted as the biggest sevens tournament in Texas with over 60 teams competing on eight pitches, featuring men’s, women’s, and youth brackets.

As this year’s Bloodfest approaches, the Huns return to Texas fresh off of their first Division I Club National Championship in their 47-year history. In a back-and-forth nail-biter, the Huns captured the 15s championship June 3 with a 27-23 victory over New York Athletic Club. After a quick turnaround, the Huns will look to continue their winning ways and repeat as Bloodfest champions after winning the men’s premier final in 2016.

“We definitely want to celebrate (and recover from) our incredible achievement, but we have to turn around and focus on both running our tournament and mentally preparing to play sevens at a high level,” Huns President Dr. Mitch Pryor said. “I give a lot of credit to the coaches and players for recognizing we still have work to do in making this tournament happen. Bloodfest works thanks to the efforts of many, many club members that step up every year.”

Bloodfest marks the first tournament of the summer that will serve as a national qualifier for both men’s and women’s clubs in the greater Texas area leading toward the 2017 USA Rugby Emirates Airline Club 7s National Championships in August. Teams vying for spots in Minnesota will attempt to accumulate points this weekend and at the Tornado Alley 7s, Space City 7s, and Cowtown 7s tournaments before the end of July.

Over the years, the Bloodfest tournament has successfully grown the sport and the name itself has drawn attention to the increasing need for blood donations in the Texas area. Since the first tournament in 1997, local news outlets have been eager to use the tournament’s frightful name as a teaser and give more attention to the event and We Are Blood’s cause.

The Huns’ goal for the event each year is to promote blood donation among all participants and raise awareness for the growing need for blood and tissue donation in the community. After bringing together players, coaches, and fans from throughout the Southwest region, Bloodfest raises awareness for We Are Blood’s mission and promotes the Huns’ own personal blood drives.

The Huns’ partnership with We Are Blood connects them directly to the Central Texas community, as We Are Blood prioritizes donations based on local need, meaning that blood donations can have the greatest impact on the lives of other Central Texans.

Pryor himself has witnessed the impact of his growing club firsthand in Austin.

“I am always surprised when I head out in a Huns jersey at just how many people know about our club or know somebody who has taken the pitch with us,” Pryor said. “It is a testament to the size of our club and the success of our outreach efforts, including Bloodfest.”

Tickets for this year’s Club 7s National Championships – to be held in Minnesota at the National Sports Center – are priced at $23 for a weekend pass, or $15 per day, and will be available soon. For those unable to attend in person, the event will also be broadcast live on The Rugby Channel.