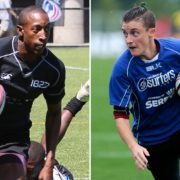 LAFAYETTE, Colo. – Twenty-four Eagles are a little more than a week away from realizing their dreams of becoming Olympic athletes.

Team USA’s rugby squads, both men’s and women’s, take pride in the diverse melting pot that makes up their rosters. Some players have been recruited out of other sports and brought into the Olympic Training Center to boost USA Rugby’s chances of taking a place on the podium in Rio. Several other soon-to-be Olympic stars have progressed through age-grade, college, and club rugby ranks until it was time for their Eagle call-ups, and many of those players did not receive a call until they showed well at a USA Rugby Club 7s National Championship event.

The Berkeley All Blues won the very first Women’s Club 7s National Championship in 2011, and it was none other than Eagles captain Kelly Griffin that took home individual hardware as the tournament’s Most Valuable Player that weekend. Although the All Blues have returned to Nationals every year since their Championships win in 2011, including a second title run in 2013, Griffin’s remarkable form in the ’11 event propelled her to become one of the initial contracted rugby players at the Olympic Training Center in 2012, and she has not been back to Nationals with the Blues since.

Several of Griffin’s Olympic teammates got to experience Finals footy a year later at the 2012 Club 7s National Championships. Eagles Ryan Carlyle (San Diego Surfers), Lauren Doyle (Chicago North Shore), and Kathryn Johnson (Youngbloodz) each reached the Cup Quarterfinals in San Francisco that summer, with Carlyle and the Surfers claiming top prize. A year later, Carlyle and Johnson returned to the Cup Quarterfinals with the Surfers and Youngbloodz, respectively, but it would be the All Blues hoisting the Cup at week’s end. Carlyle also competed with the Seattle Saracens at the 2015 event.

Many of the Men’s Eagles that made Head Coach Mike Friday‘s cut of 12 for the Olympic Games did not contend for a Club Championship until 2013 in Pittsburgh. However, a 20-year-old Garrett Bender and a 19-year-old Maka Unufe played each other in a battle for third place after Bender’s Youngbloodz and Unufe’s Utah Warriors fell in the Cup Semifinals two years earlier.

Unufe did not return to Club 7s Nationals until 2013 when he helped Seattle Old Puget Sound Beach win its sixth Championship. Bender, however, did head back to the August classic in 2012 with the Youngbloodz – the same year speedster Perry Baker made his first appearance on the national stage. After missing out on a chance to suit up with the Philadelphia Eagles due to an injury that induced a failed physical, Baker laced up a new set of boots with his local rugby club, Daytona Beach Coconuts. That summer, Baker and the Coconuts qualified for Nationals, although it was not until his 2014 run at Club 7s with 1823 Rugby that caught the attention of Director of Performance Alex Magleby. Soon after, the now-World Rugby Dream Team member received his first tryout with the Men’s Eagles Sevens.

“The 2016 Club 7s Nationals has become more important than past years, perhaps, because it is one of the few domestic sevens events on the calendar this year, and could be a real opportunity for a new wave of athlete to put his or her hand up, given it is the start of a new Olympic quadrennial heading into Tokyo 2020,” Magleby said of this year’s event.

Unufe’s Seattle squad might have won the 2013 Championship, but it was not without stiff competition from his Olympic teammates. Danny Barrett was in Cup contention by reaching the Quarterfinals with San Francisco Golden Gate. As was Ben Pinkelman, who played in his first of three Club 7s Championships in 2013 as a member of the Denver Barbarians, ultimately losing to Unufe and Seattle in the Final.

2014 was not just a big year on the club scene for Baker, but for Joanne Fa’avesi, as well. The former AIG Women’s Junior All-American standout played for the Women’s Division II National Championship with Sacramento Amazons in May, and less than two months later she was breaking lines at Club 7s Nationals, and recorded a hat trick against Mana Wahine. Unsurprisingly, the youngster from California was extended a contract to train full time at the Olympic Training Center.

Even last summer’s Club 7s National Championships had Olympians running up and down the pitch. The Barbarians were heartbroken by yet another loss in the Cup Finals, but the defeat at the hands of Seattle was not for the superb play of Pinkelman. In the women’s bracket, Jessica Javelet showed off her speed playing along a San Diego Surfers team that advanced to the Cup Semifinals. In a pool play match against Northern Virginia Rugby, the former field hockey and football player bagged herself three tries.

The trio making up the Men’s Eagles’ traveling reserves in Rio have not only competed at Club 7s Nationals, but reached the Cup Finals in doing so. In 2014, Shalom Suniula‘s Seattle Saracens defeated Nate Augspurger‘s Old Blue in a thrilling Cup Final. Just last summer, Martin Iosefo celebrated Olympic qualification by linking up with the Denver Barbarians to qualify for Nationals and progress to the 2015 Club 7s Cup Final, where he and the Barbos fell to the Saracens, 31-10. Iosefo also previously competed with the Chicago Lions.

The Men’s and Women’s Eagles representing the United States on the pitch in Rio are not the only members of Team USA that have bettered their rugby prowess at Club 7s Nationals. Richie Walker, head coach of the Women’s Eagles Sevens, had been the longtime coach of the Surfers’ sevens side, leading the team to five Club 7s Nationals, winning the Championship in two of those years.

Obviously there will not be any 2016 Olympians at this year’s Club 7s National Championships at Dick’s Sporting Good Park. However, any number of 2020 Olympians could be unearthed Aug. 13-14 in Commerce City, Colo.