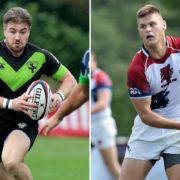 Since its national runner-up finish in 2012, the Chicago Lions have regressed at Nationals in each of the past three championship tournaments. Last summer, the Lions failed to win a game in pool play, and settled for an 11th-place finish.

Given the less-than-stellar results in 2015, it might be a good thing Chicago has revamped its lineup with some new and talented players. Kutztown University All-American Robert Stortz has come into the Lions fold this summer. The shifty center helped Schuylkill River reach the 2015 Cup Quarterfinals by scoring four tries at Nationals last summer. Along with Stortz, there are a few more players new to the Lions lineup that were playing college rugby just a few months ago, including Nick Feakes and Tyler Graham. Feakes is a nifty ball handler from Lindenwood University, while Graham was an All-Conference performer playing eight man out of Indiana University.

There is still plenty of carryover from Chicago’s 15s team, though. Centers Daniel Coci and Lucas Thiem combined for 15 tries during the Lions’ 2015-16 season, and will be immensely important to the squad’s success in sevens this weekend.

Mystic River has shown little wear-and-tear following a long 15s season that ended in a victory at the Club 15s National Championships. In fact, three-quarters of Mystic’s Club 7s squad played in the Division I title match versus the Austin Blacks. Among Mystic’s studs from the 15s season that have helped to earn the club its third overall appearance at Club 7s Nationals are dynamic centers Evin O’Driscoll and Alatasi Tupou, the latter of which took home MVP honors from the Division I Final, as well as bullying eight man Sean Rafferty.

Meanwhile, a pair of playmakers from New England College, Isaiah Lopez and Ian Luciano, have impressively beat out several others from Mystic’s deep player pool to make the traveling side to Nationals.

Atlanta Old White missed out on Club 7s Nationals last year, but made its intentions clear this summer by earning the No. 1 seed at the July 23 South 7s Championship. Now firmly rooted in the 2016 championship event, Atlanta looks to use its combination of size and speed to cause problems for the nation’s best.

Sean Hunt, Daniel Medina, and Daniel Stokes bring a lot of strength up front, while Drew Moyes is a burner on the outside. This past season playing 15s for Old White, Moyes torched the Carolinas-Georgia competition for eight tries.

Pacific Rugby Premiership’s Santa Monica Dolphins have managed to qualify for Nationals out of a very challenging Pacific South region the past three summers. However, at the 2014 and 2015 Club 7s Championships the Dolphins have recorded a less-than-stellar 6-6 record.

Only four players return to Santa Monica’s 2016 Club 7s team, including a pair with international experience. Mathieu Lesgourgues has been capped by France’s sevens team, and fly half Tyler Pritchard has captained the Bahamas sevens side.

Another playmaker that was running with rival Belmont Shore this time last summer is Victor Woo. The half back and former United States Air Force Academy All-American can beat defenders with his feet, but is also versed at putting teammates through gaps with well-timed passes.

The addition of Woo is helpful, but the loss of Harry Bennett and Zach Bonte, who combined for seven tries at the 2015 Club 7s National Championship, cannot be denied. Bennett signed a PRO Rugby contract with Sacramento Express, while Bonte is currently on tour in Australia with the AIG Men’s Collegiate All-Americans.