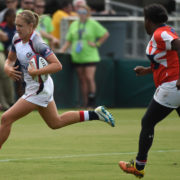 Ric Suggitt’s squad did not concede a single point in 42 minutes of rugby at WakeMed Soccer Park and finishes atop Pool A with a plus-169 point differential. The U.S. will play Bahamas in the first knockout round Sunday at 9:44 a.m. ET.

The Eagles scored in the first minute for the third consecutive match, as captain Kelly Griffin brought down the kickoff and Kristen Thomas beat two defenders with force and pace to open the scoring. Alev Kelter successfully converted the try from in front of the posts for a 7-0 lead.

Lauren Doyle, who scored five tries before the third match kicked off, put herself in position to add her sixth following the restart, but the pass to the wing was over her head. The Eagles maintained possession, however, and Kate Zackary capped the attack with run from midfield.

Richelle Stephens scored her first try in an Eagles jersey in the fifth minute following an extended attack in Cayman Islands’ half for a 21-0 lead. The recent Fallbrook High School graduate then set up Thomas for her second try with a delayed pass outside the try line before the halftime whistle.

The Eagles nearly matched their 26-point first-half output in the second half, and Stephens began the precedings with a turnover from a loose ball in front of the uprights. A minute later, Griffin dotted down between the sticks and scored another in the 13th minute to extend the lead to 43-0.

A final attack indicative of the team’s play throughout the day ended the match, as each of the seven Eagles on the pitch touched the ball from midfield to the try zone. Melissa Fowler was the one who set the ball down behind the try line, but the team as a whole earned the score and 50-0 final scoreline.

Mexico, which also finished pool play undefeated, finished atop Pool B, but could not match the Eagles’ impressive point differential. As the top seed of the eight-team tournament, the U.S. will play Bahamas at 9:44 a.m. ET Sunday.

The 2015 NACRA Sevens Championships can be viewed live on USA Rugby TV. Live match updates will be provided on Twitter by @USARugby as the U.S. seeks qualification for the Rio 2016 Olympic Summer Games.