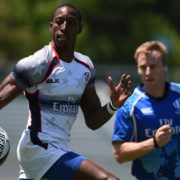 Mike Friday’s charges will face Canada in the Cup Final at 5:34 p.m. ET with a place at the Rio 2016 Olympic Summer Games on the line. The final match of the day at WakeMed Soccer Park will be broadcast on USA Rugby TV.

After a sluggish start in their pool play match against Jamaica earlier in the morning, the Eagles scored five tries in the opening seven minutes in the Semifinal. Perry Baker scored three himself, beginning with a first-minute score helped by the wide game plan of Friday.

Martin Iosefo’s first of two tries was scored in the third minute, before Baker’s second and third dot-downs bookended a yellow card to Cayman Islands. Iosefo found the space created by the six-man Cayman Islands squad just before the end of the half to send the Eagles into the break with a 31-0 lead.

Iosefo nearly had a hat trick of his own in the eighth minute, but instead thought it better to offload to an onrushing Garrett Bender for the score. A turnover to Cayman Islands in the 11th minute was recovered and turned into a signature try by Carlin Isles on the wing.

The Eagles swung the ball around the pitch as though it had been a training session at the Olympic Training Center, and exploited Cayman Islands’ lack of experience with the pace of play. Danny Barrett, Isles, and Zack Test finished off the scoring in the final three minutes to bring the score to 64-0 and send the U.S. to the Cup Final.

Canada’s 34-0 defeat of Mexico in the second Semifinal set up the rivalry match, which will see the winner off to Rio de Janeiro and the loser to the World Rugby repechage tournament, the final opportunity to qualify for the first Games to include Rugby Sevens.

The 2015 NACRA Sevens Championships can be viewed live on USA Rugby TV, with the Final – the final match of the tournament – set to kick off at 5:34 p.m. ET.