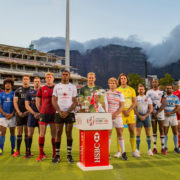 Host country and current standings leader South Africa heads one of the toughest pools of HSBC Cape Town Sevens, with Australia and Russia also set to face the Eagles in Pool A Saturday. On the American eastern seaboard, pool play kicks off for the U.S. at 5:27 a.m. ET. All matches from Cape Town Stadium will be streamed live on World Rugby’s website.

Despite not making the Cup round in the first leg of the 10-round season, the Eagles finished the opening weekend in Dubai 4-2 with losses to eventual Cup winner South Africa and sixth-place Scotland in pool play. It was a slow start against Scotland, with several passes not flying to hands and others going straight into touch. The Scots kept the U.S. quiet for extended periods, and the lone try from the Eagles came from a patient build-up from behind their own 22.

The Eagles, led by Chris Brown on the weekend due to Head Coach Mike Friday’s duties with the XVs program in November, started to put the pieces together against non-core team Uganda in its second match of pool play. Uganda’s try-scorer beat the defense with a skillful kick and chase, but Martin Iosefo and Stephen Tomasin each dotted down twice as the Eagles roared to a 29-7 win with 24 unanswered points scored in the second half.

The final loss of the weekend for the team came in one of its better performances, a 19-17 defeat to South Africa. Perry Baker matched 2015-16 Series-leading try-scorer Seabelo Senatla’s two tries, but two failed conversions kept the U.S. from the win. The improvements shown in that game carried over to Day Two’s knockout rounds, in which the Eagles were clinical in a shutout of Russia and advanced to the Challenge Trophy Final against Samoa from a back-and-forth affair with Kenya.

*The Challenge Trophy is the new name for the bottom-half bracket of any given tournament, previously consisting of the Bowl and Shield Finals. Teams are now ranked by place at each stop, with the three teams at the top of the Cup round receiving medals and the winner of the other bracket taking home the Challenge Trophy.

Captain Madison Hughes extended his lead atop the U.S.’s all-time points-scoring chart with 39 points from three tries and 12 successful conversions in Dubai. He will most likely lose his fifth-place standing of points leaders on the current season this weekend, as he and Friday are taking time away from the team after a long year of rugby. They will be back for the back-to-back Oceania legs in 2017.

Moving into the 12-man lineup in place of Hughes is Anthony Welmers, a standout at Davenport University who even took time away from his collegiate career to serve in the United States Army. His debut on the Series follows those of Alec Gletzer, Don Pati, and Kevon Williams from Dubai. Pati proved why he was named 2016 USA Rugby Club 7s National Championship Most Valuable Player with his quick foot speed and ability to read a gap in his time on the field, and was heralded by Brown for raising his passing game to the international standard.

Gletzer helped to solidify the forwards in his brief stints in Dubai, and made several tackles that ensured the Eagles moved on through the Challenge Trophy bracket. Williams, filling in for an injured Carlin Isles, caused plenty of chaos in the middle of the field to create space for teammates on the outside, floating a perfect skip pass to Iosefo for a try against Uganda. The unheralded portion of that particular play was Williams’ hard run towards a defender to ensure the overlap for his former Denver Barbarians teammate.

Iosefo came into the start of the Series with his own string of high-level international play having made his 15s debut with the USA Rugby Selects and the Eagles in October and November, respectively. A crucial member of the midfield along with Folau Niua and Maka Unufe, Iosefo scored three tries on the weekend and was found in support as a key distributor for several other tries.

While North American neighbor Canada sits at the bottom of its own ‘Pool of Death’ with Argentina, England, and New Zealand, the Eagles were drawn in Pool A with the Cup champion and the fifth-place finisher from Dubai.

The Eagles had qualified for 14 of 19 Cup Quarterfinals out of pool play during the 2014-15 and 2015-16 seasons, meaning they finished first or second in their pools. Regardless of their performance in the knockout stages, the fact they would finish in the top half of the field predominantly led to more favorable pool draws. With the Challenge Trophy title from Dubai, the U.S. was in the third band of teams placed into Cape Town pools, and had an equal opportunity to face Fiji and France, England and New Zealand, or Wales and Scotland on Day One.

Brown will again lead the Eagles as head coach this weekend, while Baker – ranked third by World Rugby’s Performance Tracker in Dubai – has been named captain in his 21st Series appearance.

Australia’s men have not been the dominant force their female counterparts have been on the Women’s Sevens Series in the past year or so, but the squad has consistently been a top-five team since the 2013-14 season. The Eagles won one of the three matchups with the Aussies last year: the most recent meeting between the two at HSBC / Cathay Pacific Hong Kong Sevens. Australia dropped only the Cup Quarterfinal against Wales last weekend on the way to a fifth-place finish, and will open Cape Town against the Eagles.

Fiji may have won the 2015-16 Series and the gold medal at the Rio 2016 Olympic Summer Games, but there is no hotter team than bronze medalist South Africa in the world of Rugby Sevens. The Blitzboks have won 25 of their last 30 games, and have not lost consecutive matches since last season’s HSBC Canada Sevens Cup Final (against New Zealand) and the pool opener in Hong Kong four weeks later (against England). South Africa will be coming out of a match against Russia when the Eagles line up opposite their Pool A foe.

Russia narrowly qualified for Core Team status in Hong Kong in 2015 and outperformed Portugal in 2015-16 to keep its spot on the Series, but the Bears failed to advance further than a Bowl Semifinal and won just 15 of their 57 games heading into Cape Town. The Eagles hold a slim advantage in the overall Series record with five wins and four losses in the matchup, and will look to win a fourth consecutive contest against the Russians in the final match of pool play.

World Rugby’s stream of the Sevens Series will again be made available for viewers in the United States, and can be accessed online at WorldRugby.org/Sevens-Series. The Eagles kick off the campaign to better their eighth-place standing on the Series against Australia at 5:27 a.m. ET Saturday. The final match of pool play is scheduled for 12:34 p.m. ET, with Sunday’s knockout rounds held between the hours of 3 a.m. and 1 p.m. ET.