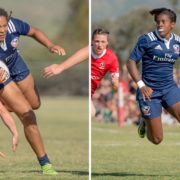 Ryan Carlyle, still traveling to Japan with the Women’s Eagles Sevens, has been replaced in the 12-player roster for HSBC Kitakyushu Sevens by Lilly Durbin.

CHULA VISTA, Calif. – Women’s Eagles Sevens Head Coach Richie Walker has included two uncapped athletes on the HSBC World Rugby Women’s Sevens Series to travel with the team to Japan for HSBC Kitakyushu Sevens, the fourth round of the season.

Having played Canada in the HSBC Sydney7s Cup Final and HSBC USA Sevens Bronze Final in the past two legs, sixth-place U.S. has been drawn alongside its border rival in Pool D for the April 22-23 tournament. The Eagles will also face England and Spain on Day One, with the broadcast available to viewers in the United States on The Rugby Channel.

Eight of Walker’s 12 selections played for the XVs Eagles in the 2017 Can-Am Series at the Chula Vista Elite Athlete Training Center two weeks ago. Captain Alev Kelter started at both of the center positions and was responsible for the team’s kicking duties, while Kristen Thomas made her international test debut at wing. Most-capped Eagles Sevens player Kelly Griffin also debuted at scrum half.

Brigham Young University graduate and powerful No. 8 Jordan Gray earned her ninth and 10th caps, steadying the scrum against the No. 3 team in the world. Her performances with the Eagles, the Women’s Premier League Champion San Diego Surfers, and at the Training Center as part of the residency program have caught the attention of Walker, who will hand her a Series debut in Japan.

Bulou Mataitoga showed flashes of her capabilities in Dubai to start the season before being unavailable for selection in Australia. She and fellow Japan selection Kelsi Stockert were in the greater Can-Am player pool, with Stockert capped on the Series at Sam Boyd Stadium.

Nicole Snyder also retains her place in the team having been one of several influential substitutes in the Eagles’ Bronze Final campaign. Ryan Carlyle has been a steady presence within the program for several years, and recuperated from an injury in the April 1 test against Canada to earn her ninth Series selection.

The first Women’s Sevens Series event to be held in Japan will start in the evening hours of Friday, April 21, on America’s east coast. The Pool C-opening match against Spain is scheduled for 9:30 p.m. ET, with the final match of Day One – the rivalry matchup against Canada – kicking off at 3:20 a.m. ET Saturday. The entire tournament can be watched live for free on The Rugby Channel.