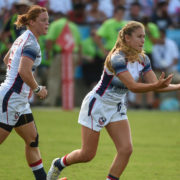 CHULA VISTA, Calif. – Less than a week after a successful Rio 2016 qualification campaign at the 2015 NACRA Sevens Championships, the Women’s Eagles Sevens squad for next month’s Toronto 2015 Pan American Games has been selected.

The July 10-26 international multi-sport event will include women’s Rugby Sevens for the first time in its history. The men’s team won bronze at Guadalajara 2011, two years after the sport was voted to be added to the Olympic Summer Games Program.

Matches are scheduled for Exhibition Stadium the weekend of July 11-12, with the U.S. and its five pool mates – Argentina, Brazil, Canada, Colombia, and Mexico – participating in a round robin prior to a single knockout match.

“The girls who were left behind looked really sharp in training,” Eagles Head Coach Ric Suggitt said following his return to the Olympic Training Center. “The rest’s done them a world of good.”

The Eagles scored 369 points in six matches at WakeMed Soccer Park, including 88 in the Final, against Bahamas, Barbados, Cayman Islands, Jamaica, and Mexico. Canada holds a 4-1 record in matchups with the U.S. this season, during which the rival to the north finished the Series in second.

“Argentina could definitely surprise, and Colombia knocked them off in their qualifier,” Suggitt said. “There are two up-and-comers right there. Brazil’s been on the circuit all year and they’re always tough to play against. They’re physical at the tackle area, physical at the breakdown, and they have a couple speedsters.

“Canada is Canada. They’re the number-two team in the world. They’re a pretty solid bunch. It’s going to be a good tournament.”

Stephens filled in at outside half for an injured Bui Baravilala last weekend and helped set up try after try with accurate, well-weighted passes to teammates in stride. The Girls High School All-American and Youth Olympic Games representative scored two tries as the Eagles did not miss a beat in winning the tournament and qualifying for the Rio 2016 Olympic Summer Games.

“Richelle’s demonstrated already at every level at which she’s played that she has the fundamental skills and the maturity to keep advancing,” Suggitt said. “This next stage in her development will be really good for her.

“What we really find with Richelle is she’s got a real head for the game. We expect great things coming from her not only in the next month but in the next 10 years.”

The U.S.’s Pan Am Games campaign begins with matches against Brazil, Colombia, and Argentina on day one at Exhibition Stadium. Tickets can be purchased via the Toronto 2015 Pan American Games website.