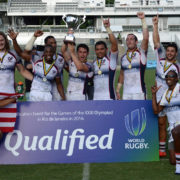 CARY, N.C. – The Men’s Eagles Sevens finished the perfect weekend at WakeMed Soccer Park Sunday with a 2015 NACRA Sevens Championships title, qualifying for the Rio 2016 Olympic Summer Games after a 21-5 slugfest with Canada.

Both teams went into the final with undefeated records, though Canada played four pool matches while the U.S. received a bye due to Saint Vincent and the Grenadines’ forfeiture. Combined, the two nations outscored opponents 435-12 in the nine matches leading up to the Final.

The game had a different intensity than that of any other match during the regional qualification weekend. From the teams walking out of the tunnel prior to the anthems to the final whistle, there was a championship vibe in the stadium, filled with 2,444 screaming fans.

The Eagles struggled in the set pieces to start the match, including a second-minute lineout following a penalty to Canada in the U.S.’s half. Canada, too, fell prey to unforced errors with a forward pass on the stolen possession.

Madison Hughes helped overturn a fourth-minute scrum and Andrew Durutalo ran past Canada’s 10. The Eagles remained calm in possession and swung the ball back into their own half, where Perry Baker ran 60 meters for the opening try and 7-0 lead.

With fans still on their feet, Hughes saved a try as full back when Phil Mack seemed destined for the try zone in open play. Durutalo turned the ball over in the breakdown and Baker again ran away from his defenders towards the try line. As he reached the final defender on the wing at the 22, he offloaded to Danny Barrett. The University of California graduate outraced Sean Duke to the try line to extend the lead to 14-0.

Baker was close to setting up a third try from his own half, but suffered an injury in contact. Head Coach Mike Friday was forced to make a substitution just seven minutes into the 20-minute match, inserting Carlin Isles earlier than anticipated.

Isles proved a handful for Canada, which decided to use three defenders to tackle the speedster on his first touch of the ball. Hughes’ through-the-legs toss from the breakdown went just wide of Barrett at midfield, but the forward calmly collected the ball before passing it to the opposite side of the pitch. Folau Niua dummied a pass with Maka Unufe on the wing to gain Canada’s half and, eventually, the 22, before offloading to his teammate for a 21-0 lead.

With just seconds remaining in the first half, Garrett Bender did well to take his opposite number into touch at the attacker’s 10, which caused a poor pass from the Canadian. The Eagles pounced on the ball, but Niua was shown a yellow card in the breakdown.

Match official Rasta Rasivhenge ended the half before Canada could get an attack going with the man advantage, also allowing the full two minutes on the sinning to run in the second half.

The Eagles defended valiantly with six men, with Bender and Isles each coming through with a sure tackle on Mack while Niua was in the bin. They were rewarded for their efforts when Niua returned to the match, as Bender was replaced by Zack Test and Isles was able to move to the space on the wing.

Harry Jones put five points on the scoreboard in the 17th minute after a tackle on the try line allowed the Canadian to roll over with the ball on the ground. The conversion was unsuccessful off of the left upright, however, for a 21-5 U.S. lead.

After a hairy minute of defending, Chris Wyles, in his first tournament with the squad since the 2008-09 World Rugby HSBC Sevens World Series, kicked a loose ball downfield and gave chase, but was shown a yellow card when a Canadian was taken into touch.

Defending with six men once again, the Eagles kept Canada on its side of midfield and waited for the whistle to blow before celebrating their place at the Games of the XXXI Olympiad.

With relegation a very real possibility for the Eagles during the 2012-13 and 2014-15 Series, the hire of Friday prior to the most recent season was the impetus the squad needed to reach the next level of its evolution at the Olympic Training Center in Chula Vista, Calif.

“Huge credit to the boys in terms of believing in me to believe in them to believe in me to get here, and they got themselves here,” the head coach said after the Final. “They’ve grown as rugby players over the last 10 months. It wasn’t easy for them, but I’m immensely proud of them right now.”

The United States took the center podium spot at the 1920 and 1924 Olympics in the 15s version of the game, the last time rugby union was on the Games Program. A sixth-place finish on the 2014-15 circuit, the team’s highest in its history, shows the improvement, while defeating Canada after a long, hot weekend in North Carolina proved the team’s credentials to fight for another medal.

“They’re now men,” Friday said. “They’re now men rugby players and men off the pitch. They hold themselves higher off the pitch, the know how to play the game, and they still have so much to give; there’s still 20 or 30 percent in them [after the match against Canada].

“I’m so excited about what lies ahead on this journey.”

The U.S. will now prepare for the upcoming Pan-American Games in Toronto, which kick off July 10 in Toronto. Following that, the Eagles will resume their climb up the Series ladder against the world’s best, including 2014-15 Champion Fiji and reigning Rugby World Cup Sevens Champion New Zealand.