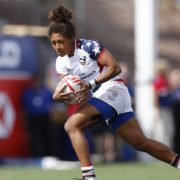 The developmental side of the Women’s Eagles Sevens finished last weekend’s three-day Las Vegas Invitational with a 5-1 record, narrowly missing a place in that tournament’s Cup Final with a loss in the Quarterfinal. Five players from that Falcons squad and two Eagles from the side that placed fourth at HSBC USA Sevens are with the team north of the border.

“We’re looking forward to building on the 5-1 performance in Las Vegas with a new group of Falcons in Vancouver,” Bydwell said ahead of Thursday’s first match.

Eventual LVI finalist Tribe was the only team to beat the Falcons in Las Vegas to the tune of 19-17 in the Quarterfinal. The Falcons had run in three tries having already scored 83 points in three pool matches before the Australian developmental side took the final lead with two quick tries in the final two minutes of the game.

The Falcons, who had been consistently growing stronger and more confident in their attacking and defensive structures throughout the tournament, learned a lesson in game management in the loss. They rebounded on Day Three to see out the tournament with two additional wins against a combined side, Ravens, and a strong Team Quebec.

“We knew Tribe would be an athletic and experienced side,” Bydwell said. “Our focus was on stressing their defense as a unit by moving the ball to the outside channels and keeping possession over multiple phases. The girls rose their play to the occasion and were able to break the defense, linking with support for three great tries.

“The challenge is always how to come back from losing a tight Quarterfinal. The ladies took that challenge on board and came back with two improved performances on Day Three. The tournament culminated in a massive win against Quebec where the girls attacked as a unit and all 12 players made an impact in a solid victory.”

Cassidy Bargell, one of the five Falcons in Las Vegas that traveled to Canada, was the youngest member of the team at 17 years of age (and was brought inside Sam Boyd Stadium to sit with the Eagles in their final matches of USA Sevens). Still the youngest, she is joined by fellow Girls High School All-Americans powered by Atavus Suiluana A’Au, summer 2016 captain Atumata Hingano, and MaryJane Pasioles in Vancouver.

Capped Eagles Sevens players Sarah Buonopane and Nicole Strasko returned to the Falcons jersey, while Bulou Mataitoga and Kelsi Stockert traveled with the squad after spending their weekends in Las Vegas with the Eagles. Seattle Saracens’ Megan Sanders is also with the squad having impressed the national team coaching staff with one of Atavus’ teams in the LVI.

The Falcons are scheduled to play each of the three opponents in their pool twice this weekend, with the developmental side of South Africa the final matchup for both Thursday and Friday. Scoring updates from the Vancouver Rugby Festival can be found on BC Rugby’s website and the tournament’s Twitter account (@vanrugbyfest).