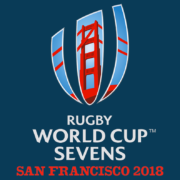 Scotland, Canada, Argentina and Samoa have become the latest men’s teams to qualify for Rugby World Cup Sevens 2018 in San Francisco by virtue of their finishing positions in the HSBC World Rugby Sevens Series, which concludes in London on Sunday.

All eight quarter-finalists from RWC Sevens 2013 in Moscow (New Zealand, England, Fiji, Kenya, South Africa, Wales, Australia and France) qualified automatically for the 2018 edition of the tournament as did host team USA. Under the agreed qualification process, the top four teams outside of those eight at the 2016-17 series can book their place in San Francisco meaning the Scots, Canadians, Argentinians and Samoans are now confirmed.

The remaining 11 nations in the 24-team tournament will be decided by virtue of regional qualifying tournaments in Europe, Africa, North America, South America, Asia and Oceania.

Tickets will go on sale July 20 – exactly one year to go – but fans who subscribe to the RWC Sevens newsletter will receive advance access to tickets ahead of the general public.

Subscribers to the RWC Sevens 2018 newsletter will receive a special promotional code giving them advance access.

Canada captain Nate Hirayama said: “We’re delighted to have qualified for Rugby World Cup Sevens 2018. It’s going to be the highlight of the year for us. San Francisco will be a great venue and is not too far from home. I think a lot of our supporters will be coming down for it and we hope that as many Canadians as possible will be there to cheer us on. It’s going to be a special tournament and now that we’ve qualified we’re already really looking forward to competing.”

Scott Wight of Scotland said: “We took the season tournament by tournament and so to qualify for Rugby World Cup Sevens is a great bonus. Now that it has happened, the lads can concentrate on it and really look forward to what is going to be a major tournament in San Francisco. We’ve had a lot of young players who have learned a great deal this season and as we continue to develop and improve as a team hopefully they can really make a difference at Rugby World Cup Sevens next year.”

Samoa skipper Falemiga SeleSele said: “Yes, it’s great. The coach has talked to us about the importance of Rugby World Cup Sevens next year. It’s been a tough season for us but we are improving all the time. There have been some real positives this season, especially in recent weeks. The boys are young and we hope to have learned a lot more by the time the competition kicks off in San Francisco next year.”

Captain Gaston Revol of Argentina said: “It’s really great to have finally qualified for Rugby World Cup Sevens 2018. It’s going to be a unique experience to be playing such an important tournament in an amazing place like AT&T Park. Rugby is really growing in that part of the world, so there’s real excitement around having a tournament in San Francisco. It will be a tough series next season and to finish it off with Rugby World Cup Sevens will be fantastic and it will give the entire season a real focus.”

Host team USA captain Madison Hughes said: “We are just over a year away from it and there’s some real excitement around the event already. AT&T Park there in San Francisco is a really cool venue, one of the cooler venues for baseball in the USA so to play rugby there will be really special. We’ve watched baseball games there so to be inside that stadium playing sevens will be awesome.”

Tickets for RWC Sevens 2018 will go on sale on July 20, 2017, exactly one year before the tournament kicks off.

World Rugby Chairman Bill Beaumont said: “Congratulations to Scotland, Canada, Argentina and Samoa for securing their place at RWC Sevens next year and so avoiding the difficult route to qualification via the increasingly competitive regional process. All four teams have shown good form of late on the series with Scotland getting to the final in Paris last weekend and Canada winning a series tournament for the first time in Singapore in April.

“Argentina have been consistent performers through the series while Samoa have started to put in the results we know they are capable of, especially in Paris where they beat Olympic champions Fiji and ended up coming fifth.

“Being staged in the vibrant and diverse city of San Francisco, Rugby World Cup Sevens 2018 is going to take the tournament to new heights and as the quality of men’s and women’s sevens continues to amaze, fans in the US and those traveling from overseas are in for a real treat next July.”

The iconic AT&T Park, home of the San Francisco Giants baseball team, will provide the spectacular backdrop to the tournament that features 24 men’s and 16 women’s teams competing for the title of world champions. The 42,000-seater stadium is one of the most familiar and highly rated sports venues in the USA and is located in downtown San Francisco, along the waterfront overlooking the bay.

This will be the seventh staging of the tournament, which has previously been held in Edinburgh, Hong Kong (twice), Mar del Plata, Dubai and Moscow. Having won both the men’s and women’s events at the famous Russian venue of Luzhniki Stadium, New Zealand will be back to defend their titles but will likely face considerable resistance in the form of Olympic gold medallists, Australia (women’s) and Fiji (men’s), not to mention strong home competition from both USA sides.