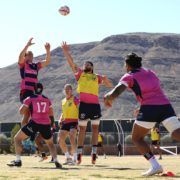 The U.S. improved its 2016-17 HSBC World Rugby Sevens Series standing to sixth (level on points with Australia in fifth) with the third-place finish at its home tournament. The Canadian leg is the sixth round of the 10-stop circuit, and kicks off Saturday, March 11, before the knockout rounds Sunday, March 12. The tournament can be watched live in the United States via World Rugby’s Sevens Series website.

“If we stay healthy we can compete with the rest of the world at Vancouver, where travel fatigue and jet lag will not be a problem,” Friday said. “The pitch suits us as it is a fast track and a wide pitch, so will provide more space than last week.”

Danny Barrett was named to a second consecutive Dream Team in Vegas following the fourth-round selection in Sydney, and surpassed speedster Perry Baker as the team’s leading try-scorer this season with five tries over the weekend. In fact, Barrett passed his teammate in the first pool match, recording a hat trick of tries in a defeat of Samoa.

The forwards combined for 61 of the team’s 131 points scored with Stephen Tomasin also converting three tries. The San Diego State University graduated and captain Madison Hughes successfully converted 62 percent of the-five pointers, while Hughes’ goal-kicking was just as instrumental to the Eagles’ Cup Quarterfinal victory over Argentina as Maka Unufe’s influence on the knockout game.

Baker did cross the try line twice and kept defenses honest on a thin Sam Boyd Stadium field, cutting in from the touch line on the match-winning try against Argentina. He will have more room to run at BC Place Stadium, where he scored eight tries in six matches last year.

Debutant Walt Elder spent a few minutes on the field in Las Vegas and will have further opportunities to cement his place in the team this weekend, while 20-year-old All-American Malon Al-Jiboori will provide injury cover to Friday’s squad as the 13th player on the roster.

The Eagles were drawn into Pool C in Canada with Australia, France, and Japan, teams against which the U.S. is unbeaten this season.

“If we stick to the plan as a squad we can live with anybody on this circuit with the balance of pace, power, and physicality we have in our 12,” Friday said.

Pool play for Friday’s squad will commence at 12:52 p.m. ET against Japan, the teams’ second matchup of the season. The entire tournament can be viewed live in the United States via World Rugby’s live stream on the Sevens Series website.