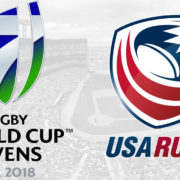 In a historic moment for United States rugby, it was announced today that USA Rugby’s bid to host the 2018 Rugby World Cup Sevens has been accepted! The fast-paced tournament will be played in the San Francisco Bay Area at AT&T Park and Avaya Stadium.

“We are delighted to be chosen to host the 2018 Rugby World Cup Sevens,” said USA Rugby CEO Nigel Melville. “We look forward to delivering a fantastic rugby sevens experience for the players, fans, sponsors and media.

With Rugby Sevens set to make its Olympic Games debut at Rio 2016, World Rugby made the decision last year to move Rugby World Cup Sevens back one year, into the middle of the Olympic cycle to maximize the sport’s integration on the Olympic Games program.

World Rugby Chairman Bernard Lapasset said: “Rugby Sevens continues to go from strength to strength, proving a hit with the fans, broadcasters and sponsors around the globe with its winning blend of compelling and competitive action, global destination and festival atmosphere.”

That “festival” atmosphere will be on full display in 2018. AT&T Park in San Francisco is most commonly known as the home of the San Francisco Giants. Those who have visited the park know it as one of the best places in the world to catch a game – no matter the sport. The stadium was designed to replicate a classic urban ballpark with an old-time feel, but still featuring all the amenities of modern ballparks.

While AT&T may throw back to the past, touring fans will get a taste of the future at Avaya Stadium in San Jose. Only recently opening its doors to the public in March 2015, Avaya Stadium has already been named one of the most technologically advanced stadiums in the world.

The Rugby Sevens game is a relatively new take on a classic. It only makes sense that one of the world’s premier tournaments is played in stadiums that pay tribute to the past and present.

USA Rugby will host two press conferences on Thursday, May 14 at AT&T Park and Avaya Stadium to share the excitement with local fans and media.