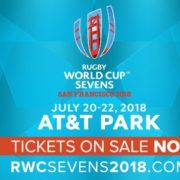 With exactly one year to go, tickets have gone on sale for Rugby World Cup Sevens 2018 in San Francisco and tournament organisers believe that the winning blend of an attractive programme, world-class men’s and women’s sevens and the very best the Bay Area has to offer visitors will make it one of the must-see events of the year.

Tickets are available at www.rwcsevens.com and are priced from just US$125 for a three-day pass as USA Rugby look to attract new fans to a sport that has already started to capture hearts and minds within the sports-mad country.

The event, hosted at the iconic AT&T Park, home of the San Francisco Giants baseball team, from 20-22 July, aims to take the sevens experience and give it a uniquely American flavour in a live sports market renowned for its innovative and engaging fan experience.

The tournament will bring together the world’s top 24 men’s and 16 women’s teams for three days of intense competition spread across two venues. New Zealand will be trying to retain the 2013 men’s and women’s titles they won in Moscow while Olympic champions Fiji (men) and Australia (women), among others, will be pushing them all the way.

It is expected that competitive travel packages for international and domestic visitors from official operators will attract thousands of fans from the competing teams. Details of those packages will be available in due course from www.rwcsevens.com.

A new, innovative format will be in place for the tournament ensuring that every single match is critical for teams looking to progress to the final stages.

With sevens having made a spectacular debut at the Olympic Games in Rio 2016, and the ongoing success and growth of the HSBC World Rugby Sevens World Series, the sport has never enjoyed such a prominent global spotlight as it continues to grow beyond the traditional rugby heartlands.

World Rugby Chairman Bill Beaumont said: “This is the day that sevens fans in the USA and around the world have been waiting for as the tickets for Rugby World Cup Sevens 2018 go on sale for the first time.

“Through a competitive ticketing programme and a global broadcast platform, USA 2018 will give thousands of sports fans in the San Francisco Bay Area, all along the west coast of North America and around the world the opportunity to experience this thrilling, all-action sport up close and personal.

“Rugby sevens is going from strength to strength around the world with record participation figures, more men’s and women’s nations competing at the top level, record attendance numbers and ever-growing broadcast figures and I am sure that Rugby World Cup Sevens 2018 in San Francisco will write another memorable chapter in the sevens success story.”

USA Rugby CEO Dan Payne said: “Today is a special landmark for Rugby World Cup Sevens 2018 as we are now engaging directly with the global rugby family and general public. We offer a warm welcome to all visitors to San Francisco and we are confident that you will leave knowing that you have been part of something special, a tournament that has connected with a new rugby frontier and one that has added to the sport’s reach and left its mark.

“Our goal is to deliver a spectacular Rugby World Cup Sevens that delivers a variety of ticket packages affordable for all visitors. And while spectators will come for the rugby, they will stay for everything else that the amazing city of San Francisco and its surrounding area has to offer. It really could be the rugby trip of a lifetime.”

Qualifying for the tournament kicked off earlier this year and with the identities of 15 men’s and 10 women’s teams already known, anticipation is growing that RWC Sevens 2018 will provide yet another boost to the sport in what is an important growth market.

World Rugby Chief Executive Brett Gosper said: “The inclusion of rugby into the Olympic Games programme has been great for the sport in many ways and is now the pinnacle event for sevens. Equally, the HSBC World Rugby Sevens Series has given the shorter format of the game a profile and following never before seen.

“As a result of these success stories, there is an opportunity to examine what Rugby World Cup Sevens is and where this great tournament sits in the hearts and minds of players and fans around the world. We want to make sure it is a special event with its own identity that provides a unique experience to fans, teams and viewers, something different to what they see on the series or at the Olympics.

“So, we have come up with this innovative, never-before-used format that allows for a fully integrated competition between men and women to be completed within three days. It provides a prime-time final for the women on Saturday night and the same for men on Sunday with every match being crucial along the way. This will provide the drama and excitement of a knock-out competition for all matches with no draws.

“The pre-event seeding, based on teams’ relative strength, should limit one-sided matches and ensure that all matches are spectacular with fewer predictable outcomes.”