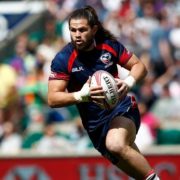 Zack Test has recovered from an injury that kept him out of the final round of the 2014-15 World Rugby HSBC Sevens World Series, Marriott London Sevens, to return to the team, while Chris Wyles earns his first selection to the Eagles under Head Coach Mike Friday.

The team traveled to North Carolina with 13 players available for the weekend tournament, which will consist of four matches in pool play prior to the Cup Semifinals and the final round of knockout matches. The winner of the 10-team tournament will represent North America Caribbean Rugby Association at the Rio 2016 Olympic Summer Games.

“It’s not just the 13 guys here,” Friday said at training Friday. “It’s also the five or six we left back at the Olympic Training Center, because they’ve put all the hard work in as everyone else has for the past nine months.

“We’ve talked about it being a squad effort of the 18 to 20 of them that have been the bedrock of this sevens squad and have allowed us to change the culture and the environment and reposition this program.”

The U.S. will kick off their campaign in Cary against Saint Vincent and the Grenadines Saturday at 1:22 p.m. ET before matches against additional pool opponents Barbados and Mexico.

Pool play will wrap up Sunday for the men’s competition, with the Eagles in the first match of the day against Jamaica. Each of the matches featuring the United States, as well as all of Canada’s pool matches, will be played in the main stadium at the WakeMed Soccer Park complex.

Qualification for the Games of the XXXI Olympiad can also be attained through the final repechage tournament, which will be held before the end of June 2016.

Visit the 2015 NACRA Sevens Championships to see the full fixture list and to purchase tickets, which start at $15. Tickets can also be acquired at WakeMed Soccer Park Saturday, June 13, and Sunday, June 14.