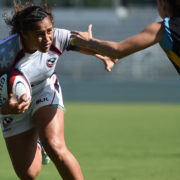 CARY, N.C. – The Women’s Eagles Sevens denied yet another team from reaching their try zone Sunday in a 59-0 defeat of Bahamas at the 2015 NACRA Sevens Championships.

Ric Suggitt’s squad will play Jamaica, a team the Eagles shut out in pool play Saturday, in the Cup Semifinal at WakeMed Soccer Park at 12:29 p.m. ET.

Reminiscent of the match-opening play in the U.S.’s 74-0 defeat of Barbados, Kate Zackary caught the kickoff and saw a gap in the defense for a 60-meter try. Despite a penalty against the Eagles deep in their opponent’s half, Joanne Fa’avesi extended the lead to 14-0 after forcing a turnover.

Lauren Doyle and Kristen Thomas played a one-two down the left-hand touch line in the third minute for Doyle’s sixth try of the tournament and a 21-0 lead. Thomas and Fa’avesi added a try apiece before seven minutes had been played and the Eagles were close to scoring a sixth, but the U.S. took a 33-0 lead into halftime.

Dana Meschisi made the impact Suggitt hoped a substitute would with a near-try in the eighth minute, but a forward pass was seen by the match official. She was able to set up a second try for Thomas with a composed pass in contact a minute later.

Eighteen-year-old Richelle Stephens extended the lead to 47-0 with a straightforward run from the 22 and Lorrie Clifford took advantage of a penalty in the 13th minute to juke her opposite number into the try zone.

Clifford played distributor to Kelly Griffin in the final minute to cap the scoring, offloading to her captain in front of the try line for a 59-0 victory.

The Eagles have yet to concede a try in four matches, and are two wins away from qualifying for the Rio 2016 Olympic Summer Games. The 2015 NACRA Sevens Championships can be viewed live on USA Rugby TV, with the U.S.’s Cup Semifinal against Jamaica scheduled to be broadcast at 12:29 p.m. ET.