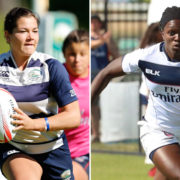 Head Coach Richie Walker has selected a squad of 12 for the first tournament of the 2016-17 circuit, including four Olympians from the Rio 2016 Olympic Summer Games as well as two of Team USA’s traveling reserves. The Eagles will play gold medalist and 2015-16 Series Champion Australia, Russia, and South Africa in pool play Thursday, Dec. 1 (U.S. time), before Friday’s knockout rounds.

Lauren Doyle leads the group in terms of experience on the Series, and will play in her 17th tournament since debuting in the inaugural 2012-13 season. She and fellow Olympians Ryan Carlyle, Joanne Fa’avesi, and Alev Kelter have combined for 303 points on the circuit.

“There have been a lot of changes in the Residency program as players have gone on to do other things with their lives post-Rio or have not been renewed for this cycle,” Walker said. “I’m very happy for the four returning Olympians and excited to see them step up and be the next leaders of this team.”

Nicole Heavirland made her debut last season and was named a traveling reserve for Rio, as was Cheta Emba. Emba was with the XVs squad during the first two years of the Women’s Rugby Super Series in 2015 and 2016, and has been a non-traveling reserve for the Women’s Eagles Sevens in the past year, as well. The Harvard graduate has speed to complement veteran Doyle and Naya Tapper in the squad and make up for the missing Kristen Thomas, who is not yet 100-percent fit to travel with the team.

Fa’avesi, Kelter, Tapper, and Kate Zackary are all currently in Europe with the XVs program for its two November Tour test matches against France. The four will join Walker’s squad in Dubai following Friday’s final matchup.

Also on debut are AIG Women’s Collegiate All-Americans Bulou Mataitoga and Nicole Strasko. The former was selected to the WCAA Sevens team following her play with Berkeley All Blues at the 2016 USA Rugby Club 7s National Championships, while Strasko had a busy middle portion of the year in winning the 2016 USA Rugby College 7s National Championship with Life University and earning her international test debut with the Eagles at the Super Series. She also trained with the Eagles at HSBC Atlanta 7s during the past Sevens season, and was added to the Residency program in Chula Vista.

Kristine Sommer has been a stalwart for the Seattle Saracens program in both XVs and sevens. Having picked up the game in college, the 26-year-old has been able to translate her athletic ability – honed through soccer – to become an effective back-row forward in the 80-minute game. Sommer’s play in the short-form version has seen Seattle reach the Semifinals of the past two Club 7s tournaments, including a runner-up finish in 2015.

In his years in southern California, Walker has worked with local youth programs in addition to his duties at the Olympic Training Center. Lily Durbin and Olympian Richelle Stephens were training at the OTC under the direction of Walker and former Eagles coaching staffs while still attending Fallbrook High School, where Dubai selection Kayla Canett graduated earlier this spring. The 18-year-old was with the second-place Girls High School All-American Sevens squad, powered by Atavus, at the Rugby Europe Women’s U18 Sevens Championship and is now attending perennial collegiate powerhouse Pennsylvania State University under the watchful eyes of Eagles past and present. She will represent her country as the youngest American in Dubai next weekend.

“I’m very happy with the selections I have made, and excited to get the first tournament going to see what our new squad can do,” Walker said. “We’re looking to get these younger athletes more experience earlier rather than later for Rugby World Cup Sevens and, ideally, the 2020 Olympics.”

The national team coaching staff has taken a page out of the recent gold medalist’s book in utilizing several younger players in the same squad. Australia may have won four of six tournaments last season and held the largest points-difference in the standings since New Zealand’s win in 2012-13 – in addition to the Rio glory – but the program finished fifth behind the U.S. in Year One.

“Australia built its squad young in that first season, four years from Rio,” Walker said. “Two years out they took over, winning everything. We’re taking a page out of their book.

“I’ve also been speaking with Adam Krikorian and the USA Water Polo staff. They’ve been tremendously helpful in our preparations and have a gold medal to show for their processes.”

The Eagles will finish pool play in Dubai against Australia after matches against Russia and South Africa. The tournament kicks off in the early hours of Dec. 1 in the U.S., with broadcast details to be finalized in the next week.