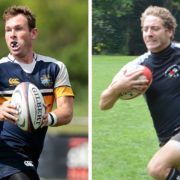 LAFAYETTE, Colo. – Half of the Men’s Pool B at the Aug. 13-14 USA Rugby Clubs 7s National Championships will be competing at its first Club 7s Nationals, but Rugby Utah and Little Rock Stormers have the talent to make up for the programs’ relatively inexperienced squads. The other half of Pool B has an immense amount of sevens experience at the championship level. Belmont Shore and Northern Virginia Rugby not only combine for 34 National Championship appearances, but four Club 7s titles, as well.

One of USA Rugby’s newest National Development Academies, Rugby Utah is doing a lot of big things in its state – including the support of an impressive select sevens side. Entering its first season playing in the Frontier competition, Rugby Utah was not expected to qualify for Nationals. The sevens expertise of Denver Barbarians and Kansas City Blues have prevented Glendale Raptors from entering a Club 7s Nationals field since 2011, but Rugby Utah defied logic by not only qualifying for Nationals, but taking the No. 1 seed out of the Frontier.

Over half the team is either currently enrolled or graduates from Brigham Young University and University of Utah – two of the best collegiate men’s rugby programs in the county. While there are a couple of quality athletes currently touring Australia with the AIG Men’s Collegiate All-Americans who were likely to make Utah’s 12-man roster, the program has the depth to back up the absentees.

Two of Rugby Utah’s more experienced players come with international experience, too. Kuli Meiohihifo, who applies his 15s trade with Provo Steelers, has represented the Tongan National Team in sevens, and former Eagles 15s and sevens player Jason Pye is also showing flashes of his international days with the Development Academy.

Northern Virginia Rugby is one of three club programs to send both its men’s and women’s sides to Nationals. The men of NOVA, a one-time leader of the club sevens scene, have fallen out of favor with the growth of the speed-driven code.

Before winning a Club 7s National Championship in 1996, NOVA played in the Cup Final four times. The program continued to be one of the top sevens sides in the country for over a decade after its championship run in 1996, but have not played in the August classic since 2013.

NOVA is blessed to have a former Eagles sevens player on its side in PJ Komongnan, but also boasts the fastest player in the tournament – ConRoy Smith. The former Liberty University sprinter has played for the Eagles development squad, the Falcons, on a number of occasions. Smith was also part of the 26-man squad that competed for a spot on the Team USA Rio 2016 Olympic Summer Games team.

Historically, Belmont Shore is one of the most dominant sevens clubs in the country. However, 2015 was not a banner year for the boys from Long Beach, Calif.

From 2008 to 2014, Belmont Shore reached the Cup Quarterfinals each summer, including three National Championship victories. Excluding a fifth-place finish in 2013, Belmont moved on to the Cup Semifinals in every year during that span, as well. The club’s incredible seven-year run made last year’s 15th-place finish at Nationals so disappointing.

Former Eagles and Belmont Shore stalwarts Justin Boyd and Peter Sio are not the speedsters they used to be, but a young crop of players kept the Pacific Rugby Premiership side in first place out of the Pacific South competition. One of the young men that has boosted Belmont’s sevens team is current Notre Dame College standout Marcus Tupuola. The 20-year-old full back scored four tries at the 2016 College 7s National Championships.

Austin Blacks and Dallas Reds had been the Red River competition’s two representatives at Club 7s National the past two years, making it rather surprising neither squad is going to be representing the region this weekend. Little Rock Stormers are a big reason why those two clubs will not be vying for a National Championship in sevens this year.

The Stormers’ one-loss season in 15s saw them into the National Playoffs – but that was in Division II. Unlike the Blacks and Reds, Little Rock plays its 15s in Red River’s DII competition – making it seem unlikely for the squad to qualify ahead of DI clubs. However, the shock wears off after a closer look at the team’s roster.

For starters, Little Rock is coached by former Women’s Eagles Sevens Head Coach Jules McCoy, and McCoy has some capable athletes to work with. Five Stormers, including former Collegiate All-American David Caswell, have played on the USA Rugby South representative side.