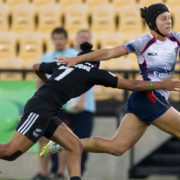 The U.S. will play Spain in the Cup Quarterfinals at 4:44 a.m. ET Saturday with Olympic qualification on the line. As long as the Eagles gain more points than France and England, they will end the 2014-15 Series in fourth.

Victoria Folayan scored two first-half tries after South Africa took an early lead through Nosiphiwo Goda to give the U.S. a lead it would not relinquish. The team’s all-time leading points-scorer’s second try was close to being held up, but the referee awarded the score outright.

Kelly Griffin extended the lead to 21-7 in the 10th minute, which featured a fend-of-the-tournament nomination by the captain on the doorstep of the try zone. The defensive effort of the Eagles kept South Africa from major scoring opportunities and Lauren Doyle capped the match with a last-minute try.

Kathryn Johnson and Megan Bonny each dotted down in-goal before the halfway mark of the first half, and six Eagles scored six tries in their defeat of Fiji. Doyle used her speed to run down the touch line into Fiji’s half in the sixth minute before Griffin passed the ball to Bui Baravilala for a few extra meters. Kristen Thomas took the ball from the breakdown for a 21-0 halftime lead.

Luisa Basei Tisolo’s chip kick was enough for Fiji to break into the Eagles’ half in the eighth minute, and efficient passing and a broken tackle by Litia Naigato set up Timaima Ravisa for the try.

The Eagles responded within a minute after Doyle’s run took the Eagles across midfield. Alev Kelter provided support before Doyle could be taken into touch, and she and Thomas followed each other for Kelter’s first try of the tournament.

Asinate Ufia Savu responded immediately with a fend on Griffin at midfield and a try to bring the score to 26-14, but Doyle did the same on the ensuing restart before Rebekah Siebach scored her first try of the season to see out the 36-14 win.

New Zealand began the teams’ final match of Pool A with possession, looking to take the top seed with both ensured a place in the Cup Quarterfinals. The reigning Series champion also secured its third consecutive title earlier in the day, but conceded a turnover in the first minute of the match to Griffin. The ball came free from the breakdown to Doyle, who scored.

A turnover at the Eagles’ 22 preceded Kelter’s run into New Zealand’s half, though she did not have the pace to beat the defense. Her offload hit an opponent and bounced towards New Zealand’s try line. Hazel Tubic’s chip kick reached midfield before bouncing into the hands of Griffin, who found Thomas on the wing for a 10-0 lead.

The U.S. continued to apply pressure on New Zealand and drew a penalty five meters from the line. A few quick passes and looping support runs brought the defenders inside, and Thomas received a pass out wide to score. The Eagles took a 15-0 lead into the break.

It continued to be one-way traffic for Ric Suggitt’s squad, as Doyle’s 12-minute hat trick bookended a try from Johnson. Kelly Brazier ensured her team would not be shut out with a try in the 13th minute for a 34-5 score line.

The win is the first for the U.S. against New Zealand on the Series, and first in seven attempts this season.

With the Eagles level on points with France and ahead of England by two, the U.S. must perform better than both to earn the fourth automatic-qualifying position in the Series standings. A Cup Quarterfinal victory would also end Russia’s hopes of automatic qualification, being eight points behind the U.S.

Watch the Eagles fight for their place at the Rio 2016 Olympic Summer Games Saturday, May 23, on World Rugby’s website.