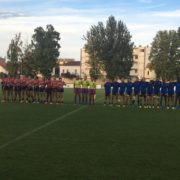 VICHY, France – The USA Rugby Girls High School All-Americans powered by ATAVUS surprised the field at Rugby Europe Women’s U18 Sevens Championship over the weekend, finishing second to France during a 5-1 campaign at Stade Darragon.

The GHSAAs scored 102 points throughout pool play, conceding just 10, in warming up for the knockout stages in central France. Wales had been beaten by Spain on Day One, and followed up its first loss with a 36-7 defeat to Douglas’ All-Americans.

The border rivalry between the U.S. and Canada extended across the Atlantic Sunday as the GHSAAs faced off against their neighbor in the Cup Semifinal. Canada found its stride on either side of halftime to take a 10-point lead, but the GHSAAs stuck to the task and overcame the deficit in the second half to advance.

France’s under-18 squad had one of the stronger pools in Pool D, and was better off for its final showdown with the Canadians. A shutout in the Quarterfinal followed a Semifinal victory over a border rival of its own, Spain, which propelled France to the 20-minute Cup Final, where it ran out to a 34-0 lead. The GHSAAs again proved their ability to stay in a game by climbing back into the Final at 34-24, but there was still not enough time on the clock for the full comeback.

The GHSAAs, as well as Canada’s team, were advertised as “special guests” of Rugby Europe Women’s U18 Sevens Championship, and showed strongly against international competition for the first time in the program’s short history. The GHSAAs kicked off the year playing sevens at Vancouver Rugby Festival prior to an undefeated summer of 15s in Maryland and Washington, giving under-18 athletes more than nine cumulative hours of international play in 2016 following the weekend. Their experiences at Rugby Europe’s Championship will go a long way through the new Olympic cycle, with all of the athletes selected for the France trip set to be no older than 23 years of age by the kickoff of the Tokyo 2020 Olympic Summer Games.