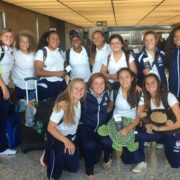 Separate GHSAA teams have already toured this season, starting with a sevens squad in British Columbia for Vancouver Rugby Festival in March. Just weeks after the AIG Women’s Collegiate All-Americans competed against a senior Canadian developmental side, the under-18 GHSAAs were joined by the first under-16 age-grade squad in Maryland for matches against Rugby Quebec’s respective teams. A week later, another GHSAA squad went to Seattle for two matches against BC Rugby’s under-18s.

Though the GHSAAs have received ample challenges from Canada’s provincial sides, this weekend’s Rugby Europe tournament will offer the age-grade program its first taste of true international competition. The team has been grouped in Pool C with Germany, Ireland, and Russia.

“This is unique for them,” Head Coach Farrah Douglas said. “They haven’t played on other continents, in other countries besides Canada. They haven’t had what we think of as a true international. It’s a first for the program overall to have the opportunity to be included in the European championship.”

“Playing against Scion early in the week was a great opportunity for us to be challenged by a structured defense and attack and recognize our critical outcomes for the rest of the D.C.-based sessions,” Douglas said. “The players are now in a place where they feel comfortable with what we are trying to do on attack and defense, and now the France sessions will be about putting some detail around our set piece and structure of our kickoffs so that we can put our best foot forward to win the possession battle.”

Seventeen-year-old Lilly Durbin became the youngest capped USA player on the HSBC World Rugby Women’s Sevens Series circuit when she made her debut at the last leg in Clermont-Ferrand this spring, and was in the running for a place on Team USA’s Rugby Sevens squad at the Rio 2016 Olympic Summer Games. She will bring that senior experience to her third GHSAA selection as team captain. The young high school senior has also previously received selections to the under-20 national team, the AIG Women’s Junior All-Americans, and is just one of seven GHSAAs in France that played at Vancouver Rugby Festival.

As the summer winds to a close, rugby players in the U.S. are turning their attentions back to the 15-a-side game. For the GHSAAs, this weekend’s event is dual-purpose in providing top-rate international competition and a feeder to future national team representation.

“We’ve looked to really empower the players to work collectively and express themselves by having veteran players Lilly Durbin and Kayla Canett develop as key voices in both our team culture and, more importantly, in how we deliver our brand of sevens to the players,” Douglas said.

“We are excited about the balance across the GHSAA squad of strong, dynamic runners; playmakers; and pure speed. This team marks a transition in American rugby with our first generation of U18s that have been playing the game for four or five years. We hope to surprise the teams with the girls’ ability to not only be athletic, but read the game and make decisions.”

Individual match times for Saturday’s pool play have not yet been made available, but matches are scheduled to be streamed live online via RugbyEurope.tv. Saturday’s stream can be found here, while Sunday’s stream can be found here. Day One’s broadcast is scheduled to begin at 4:19 a.m. ET Saturday, with the GHSAAs involved in the fifth, 13th, and 21st matches of the day. Follow @aarugby on Twitter for updates from the team, as well.