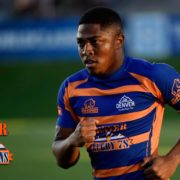 Designed for up-and-coming athletes that are not yet competing at the international level, but have demonstrated the ability to do so; athletes that have played at an international level but are not currently in the National Team Residency program at the Chula Vista Elite Athlete Training Center; and National Team pool players aiming to progress into the Residency program in the future, the ODA program provides regional opportunities for players across the country. Joining the likes of Atavus Academy, Rugby Utah, and Santa Barbara Rugby Academy out west, Denver Sevens offers athletes east of the Rocky Mountains a well-maintained and competitive training environment overseen by a host of experienced staff members.

“The developing ODA system has helped numerous would-be Eagles transition, in a short amount of time, from club to international rugby,” said USA Rugby General Manager of National Teams and High-Performance Alex Magleby. “The work done to date from the likes of American Rugby Pro Training Center, Northeast Academy, Tiger Rugby, Rugby Utah, Scion Academy, and Atavus to advance athletes, and coaches, into the Eagles–men and women, sevens and even XVs–has been one of the real positive additions to performance rugby in the U.S. over the last few years.”

The experienced staff is fleshed out by assistant coaches Jason Kelly and Tyson Meek. Kelly, also a capped Eagle and the former AIG Men’s Junior All-American coach, and Meek, who has progressed through the age-grade National Teams to earn selections in both the Sevens and XVs Eagles, have both had a long history with the Barbarians. A storied club in the Frontier Conference, Denver’s XVs opportunities complement the on-field time available to athletes in the Olympic sport of Rugby Sevens.

Denver Sevens Program Director Howard Kent will continue in his role as the program transitions to NDA status, which comes with a series of deliverables to ensure athletes are given proper training facilities; adequate training and competition time; and a more comprehensive avenue to progress to the National Team. Kent’s extensive history in the region will benefit all involved with Denver Sevens, while physiotherapist Purvi Desai is also set to stay on as a qualified member of the on-site staff.

“A quality, committed group has assembled in Denver to continue to grow and improve the game in the Rocky Mountain region,” Magleby said. “Coupling the strengths of clubs like Glendale and the Barbarians with a regional NDA will provide additional opportunities to train and compete at a higher level.”

Denver Sevens will continue to work with regional clubs in and near the Frontier Competitive Region and Rocky Mountain Rugby union to identify and develop players for high performance purposes. For more information on Denver Sevens, please contact Howard Kent (info@denversevensrugby.com).