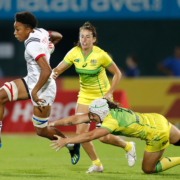 SYDNEY, AUS. – Following a fourth-place finish at Dubai Sevens 2018, the Women’s Eagles Sevens will take on the third stop in the HSBC World Rugby Women’s Sevens Series Jan 31-Feb 3 (based on Eastern Time) at HSBC Sydney Sevens 2019. Currently ranked third overall with Sydney serving as the halfway point in an Olympic qualifying season, it will be crucial for the team to maintain their Top 4 placing.

The Eagles Sevens will face China, Spain and Australia in Pool C, LIVE on facebook.com/worldrugby7s.

The squad opened pool play with a commanding 31-0 victory over China but next fell to England 12-14 after the Red Roses Sevens achieved a converted try on the final play. USA had their way shortly after, however, when their own heroic try on the final play lifted them over Australia to the tune of a 22-17 win that sealed a place in the Cup Quarterfinals.

There, the Eagles Sevens snuck past France 12-14 before an unstoppable New Zealand force held them back 0-22 in the Cup Semifinals. Still with an opportunity to medal, the United States women battled harshly in the Bronze Final against an Australian team who was narrowly focused on rectifying their earlier loss.

Australia ultimately managed the 21-26 feat, this time with the final play moving in their favor and the American women closing out the tournament third in the World Series Standings. Still in the Top 4, the Eagles Sevens will need to hold onto their ranking in order to remain in contention for Olympic qualification at the end of the season.

As has been somewhat of a tradition since the start of the season, Head Coach Chris Brown has given two new players the opportunity to make their national team debut.

The first is Kasey McCravey — a former softball player from Army West Point — who has worked her way through the Women’s Sevens Residency program and on multiple Falcons tours for a place with the senior team. McCravey was an injury reserve at the season’s first stop in Glendale and has proven to be a valuable addition to the full squad.

Boston Rugby’s Kristi Kirshe is also making her national team debut after performing well at the recent Club Sevens National Championships and being named to the Dream Team while representing Northeast Academy in the summer’s National Academy Tournament. Kirshe also recently competed with the Women’s Falcons at the Hokkaido Governor’s Cup last September and is a former D1 soccer player from Williams University.

Alongside Kirshe and McCravey is Amelia (Meya) Bizer who returns to the Sevens Series circuit after valiant performances with the Women’s Eagles (15s) in November and notable work in residency. Bizer last appeared in the Series at the Atlanta Sevens 2016.

Sydney Sevens will be another competitive test for the Women’s Eagles Sevens, especially as all teams look to cement their position in the Olympic qualifying season’s halfway point. The United States will first face 10th ranked China on Thu, Jan 31 over whom they own three consecutive victories including Rugby World Cup Sevens 2018. Ninth-ranked Spain will be next, followed by the largest battle of Pool C when the USA faces fourth-ranked Australia.

Australia are currently four points behind the U.S. Women in the overall standings, adding a unique intensity to the final game. Knockout rounds begin Friday, Feb 1 at 8:06 PM ET.

On the break between stops …
“It’s been a positive period from being able to refresh, to having the opportunity to test ourselves against a Top 2 team in the world with our scrimmage against Canada at home. Having the Canadians down for a week at the start of January timed perfectly and allowed us to practice some of the elements we worked to enhance over the last month.”

On giving new players opportunities to earn their debut…
“With the quality of athlete currently coming through the college and club game, we’ve been trying to get our hands on a number who show specific qualities since the beginning of this season. Specifically on Kristi, the Northeast Academy has spoken highly of her as a disciplined and highly coachable individual since she debuted with them last February. She’s done really well connecting with our group on and off the pitch this last month. We are excited to see how she converts for us on the rugby pitch.

“Kasey has been fighting for an opportunity for close to a year now and her consistency of application and ability to beat a player one-on-one has improved, thus the reason for her selection. Although Jordan and Meya have been here before, it’s been an exciting period where we’ve seen significant growth in them both. I am adamant they will add a lot for us when we hit the ground in Sydney.

“Ultimately, we are building towards Tokyo and having a quality squad where 18+ athletes can effectively play their part in any one of the 12 spots is a big part of the next six months of development.”

Olympic qualification remains to be the biggest goal for all teams on the World Series circuit. With rugby sevens due to make its second-ever appearance in an Olympic games at Tokyo 2020, nations are narrowly focused on finishing in the Top 4 to earn their place.

The United States Women currently sit in third-place, four points ahead of fourth-place Australia and eight points behind first-place New Zealand. With four stops still remaining (including Sydney Sevens), the Eagles Sevens have every opportunity to rise in the rankings and claim a top spot.

*All players are part of the Women’s Eagles Sevens residency program.