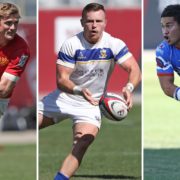 LAFAYETTE, Colo. – Speed, strength and heart. It was all on display at the 2016 USA Rugby Emirates Airline Club 7s National Championships. So much eye-opening talent took the field at Nationals that it’s almost a certainty that a few of the athletes who were making line breaks at Dick’s Sporting Good Park will be representing Team USA at the 2020 Olympics.

A panel of former Eagles who commentated the Championship weekend has generated a list of the very best of the best from Club 7s Nationals to form the 2016 Men’s Dream Team.

Old Blue is blessed to have dangerous strike runners like Derek Lipscomb, Richard Kirkland and Michael St. Claire. But if it weren’t for half back James Bird, these dynamic ball-runners wouldn’t have nearly as many opportunities to put points on the board.

Similar to how he manages the game in the No. 10 jumper playing 15s, Bird understands his strengths and those of his teammates. Unafraid of contact, Bird is happy to patiently keep the ball in his hands until the Eagle spots the right gap to exploit. Bird might not be as flashy as some of his Old Blue teammates, but he’s was just as important to the team’s run to the Cup Semifinals as any other member of the star-studded squad.

Seattle’s stranglehold over the National Championship trophy at Club 7s came to an end in 2016 with the team’s sixth-place finish. The disappointing results in Denver, however, weren’t for the play of former Eagles 15s and Sevens Miles Craigwell.

Craigwell and his longtime Seattle running mate Mike Palefau might not have the same pace as they did in yesteryears, but the former Brown University safety is still explosive enough to run around a defender and powerful enough to run through a defender. Just ask an Austin Huns team that saw Craigwell run in two tries.

Still an undergrad for D1A Rugby’s third-ranked Lindenwood University, Feakes introduced himself to the club rugby community by continuously carving through defenses at Club 7s Nationals.

Feakes was not only unfazed by his older opposition, but took over games at times. Long and lean, the Lindenwood fly half frequently stepped defenders, leaving them in his dust as he streaked to the try line. Not only did the Australian-born talent collect seven tries over the weekend, but Feakes added 20 points from the tee as well.

Like its Atlantic North rivals, Old Blue, Mystic River has a ton of weapons on attack. However, Frazier might have been Mystic River’s best at Nationals.

Frazier opened the tournament with a two-try game against Atlanta Old White, and matched his two-score production against Old Blue in the Quarterfinals. Unfortunately for the Division I National Champions in 15s, Frazier’s two scores weren’t enough to top Old Blue.

Even though the Rugby World Cup representative in both 15s and sevens has put rugby on the back burner in recent years, Hawley is still one of the best all-around players in America. Hawley looked a step ahead of the competition for most of the weekend, and at times dominated matches. Against the Schuylkill River Exiles in the Bowl Final, Hawley made up for some tired legs by running in a hat trick and helped Olympic Club bring hardware back to San Francisco.

It wasn’t only Hawley’s try-scoring ability that separates him from the pack. The former Cal All-American was a beast in the lineout and on defense, as well.

McGuffie is still raw, but watch one-half of 1823’s games and his unmatched athleticism will be impossible to miss. The one-time Michigan University running back’s lack of rugby experience kept him on the edges of the pitch, but once McGuffie got his hands on the ball he was nearly unstoppable.

An encouraging sign for anyone scouting McGuffie for future opportunities in rugby will be glad to know the speedster continued to improve as Nationals wore on. In 1823’s final match of the weekend, McGuffie dotted down twice against a very talented Mystic River team.

Last year’s four-try tournament at the 2015 Club 7s Nationals was a coming out party of sorts for Moore. Even with more attention draped around the hulking midfielder this summer, he was still able to give the Blues the go-forward ball they needed.

The former college football running back didn’t make life easy on opposing tacklers, and got past New Orleans’ grips for two tries. Unfortunately for Kansas City, a lack of possession didn’t allow Moore to make much of an impact in the Cup Final against Rugby Utah.

Tackling someone as quick and strong as Pati is no easy task. Now fit that amount of strength and shiftiness into a compact, 5-foot-7 frame and you’ve got a real problem on your hands.

Pati’s aggressive running style made him a nightmare for defenses all weekend at Nationals. Not only did the former University of Utah star score in each of Rugby Utah’s six matches, but he dotted down for multiple tries in four of those games. There were a few other players on the Rugby Utah squad that made sufficient arguments to be named the tournament’s Most Valuable Player, but nobody can argue that Pati wasn’t deserving of the MVP recognition awarded to him.

Smith wouldn’t have been at the Olympic Training Center competing for a spot on the Men’s Eagles Sevens side that competed at the Olympics if he was just a burner on the outside. At Nationals Smith once again proved he’s become a complete rugby player – of course it is fun to watch him run too.

Smith scored in each of NOVA’s six matches except for one, and was a crucial part of the team’s three-game winning streak to close the tournament, including a 28-26 Bowl Championship win over the Santa Monica Dolphins.

If you watched the 2015 Club 7s National Championships then you know Stortz is a handful to contain on the pitch. This summer the Kutztown All-American traded in his Schuylkill River kit for a Chicago Lions jumper, and Stortz’s jersey wasn’t the only different about the young center – his game has improved a lot as well.

Stortz finished the tournament with only two tries for the fourth-place Lions, but if you blinked while Chicago was on the field then its likely you missed one of his incredible offloads that time and time again put teammates into gaps for tries.

Takarangi was hands down the best player at Club 7s that virtually nobody knew before Nationals. The New Zealand born half back, who packs a massive punch for his less than massive frame, continuously exploited gaps that didn’t even appear to exist.

Not only was he the Blues primary ball handler, but Takarangi scored in each of Kansas City’s six matches, including bagging two tries in four of those games. Takarangi’s tank never seemed to empty either; scoring all of the team’s 12 points in its loss to Rugby Utah in the Cup Final.

It’s difficult to win a rugby match when you rarely retain possession, and that is exactly the predicament Whippy put Kansas City under in Rugby Utah’s Cup Final win. The Brigham Young University stalwart consistently kicked his restarts high into the Colorado sun, and gave his teammates every opportunity to win possession for the 2016 Club 7s National Champions.

Restarts are just one part of Whippy’s comprehensive skill set. The 215-pound Whippy can run through defenses as easily as he can sprint around them, which he did twice against the Blues for tries in the Championship match.