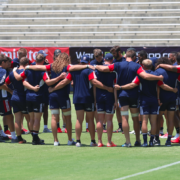 FRANKFURT, GER. – USA Rugby announces roster changes and starting lineups for the first of two final test matches to close out 2017. Following their 52-16 World Cup Qualifying win against Canada, the Men’s Eagles arrived in Frankfurt early this week for a brief training camp preceding their matchup with Germany this Saturday, Nov. 18 at 11:00 a.m. ET, broadcast live on The Rugby Channel.

Prop Eric Fry (Rugby Club de Vannes) will remain out of Saturday’s matchup following a Hernia injury that has forced him to miss the entirety of the November Internationals. Huluholo Moungoloa steps in making a leap to the Eagles rotation from Life West.

Flanker Hanco Germishuys (Austin Huns) will also miss the clash against Germany to attend to personal matters, bringing in Psalm Wooching (Seattle Saracens) after an impressive showing with the Men’s Selects in Uruguay.

Moungoloa and Americas Pacific Challenge stand out Wooching  will be looking for their first senior cap with the Eagles, while outside center Mose Faula’au (Clearmont) completes the squad lead by interim Head Coach Dave Hewitt.

“For the last four days we have really bonded as a group and gotten to know the character of each individual, how we work together as a team, and also how players operate from an on field and off field perspective,” describes Hewitt.

This first ever matchup against the Germans serves as part of a home and away series with the second contest to follow on U.S. soil in June ’18. Germany returns to the pitch at .500 after a win against their highest ranked opponent (No. 15 Romania) while the U.S. will look to carry a win into their final matchup of 2017 against Georgia in Tbilisi on Nov. 25, also live on The Rugby Channel. The squad will fly out from Frankfurt Sunday night, with a day off on Monday, players will resume training for the week in Tbilisi.

“The biggest thing for me is the quality of the German side,” said Hewitt. “They have improved quite a bit over the last several months. Showing them respect as an opponent will build a lot of emotion and energy into providing our fans with a match they’d like to watch.”