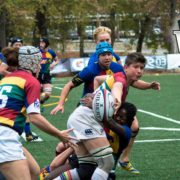 The Women’s Premier League (WPL), the highest level of women’s senior 15s club rugby in the U.S., announced today the schedule for the upcoming 2017 season. The Fall 2017 season will kick off over Labor Day weekend in Minnesota, Illinois, Massachusetts, and California. Ten weeks of competition will culminate at the Kino Sports Complex in Tucson, Ariz., for the National Championships weekend Nov. 10-12, 2017.

For the first time since the League was established in 2009, 10 teams will be competing for the National Championship this fall–an expansion from eight teams in previous years. The Western Blue Conference is comprised of Chicago North Shore, Berkeley All Blues, Glendale Raptors, Oregon Sports Union, and San Diego Surfers. The Eastern Red Conference includes Beantown Rugby, Atlanta Harlequins, DC Furies, New York Rugby, and Twin Cities Amazons. The teams will meet each other twice within their respective conferences. The top two teams from each conference will advance to the semifinals, with the remaining teams competing for the Bowl at the USA Rugby Women’s Premier League National Championships.

The WPL is a stepping stone for athletes on the USA Rugby Women’s Eagles High Performance pathway, and several factors will make the upcoming season’s competition noteworthy. With the season kicking off just after Women’s Rugby World Cup 2017 comes to a close in Ireland, many new players are expected to be making their debut in the League as they slot in for those USA Eagles recovering from tour. Additionally, the rapid pace of improvement in collegiate competition will bolster the league with an influx of recent college graduates.

“The recent college championships demonstrated an increase in skill and level of play that was exciting,” said Eagles Head Coach Pete Steinberg. “These are players that started playing the game in high school, developed their skills in college, and now their next step is into the club game. The WPL represents the highest level of play in the U.S. and this fall there is a great opportunity for recent graduates to step up as part of their development.”

As the longest standing club league in the country, the WPL continues a steady path of growth and increased competition.

“Our focus with the WPL has always been to bring more quality, high-level rugby to more athletes in the U.S., and our expansion is the next step towards that goal,” said League Commissioner Milla Sanes. “The 2017 season will indeed do that, with 40 regular season matches and 10 matches as a part of the National Championship.”

About the Women’s Premier League

The Women’s Premier League (WPL) features the nation’s top women’s rugby talent and is the highest level of senior club 15s competition in the U.S. The WPL consists of ten teams from coast to coast that are split into two five-team conferences. An eight-game regular season is followed by tournament play for the USA Rugby WPL National Championship title each fall. WPL players make up a bulk of the U.S. national women’s team, the USA Rugby Eagles.

Founded in 2009, the League is completely player-run and operates in partnership with USA Rugby.