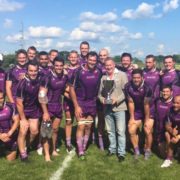 LAFAYETTE, Colo. – Ohio won the match, but Denver celebrated a championship title. That was the scene in Obetz, Ohio, when PRO Rugby’s historic first season ended with an Aviators’ 32-25 win, but the Stampede’s ability to stay within seven points of Ohio granted Denver a bonus point – keeping the boys from Colorado one standings point ahead of the Aviators, and crowning the Stampede as Champion.

Playing in front of a standing room-only crowd at Memorial Park, the packed house was not the only indication there was additional meaning behind the 30th and final game of the PRO season. The evenly matched 80-minute contest included the extreme physicality and the occasional post-whistle confrontation expected of a championship match.

The game opened, fittingly enough, with a try by Ohio’s captain, Jamie Mackintosh. The former All Black prop, in similar fashion to Denver’s captain Pedrie Wanneburg, made an immense impact for his side throughout the season.

Following a failed cross-kick attempt by Will Magie broken up by Aaron ‘Spike’ Davis, Denver’s fly half went for the more sure-handed route of passing to Chad London on the ensuing possession, and the Eagle center dummied his way to the try line to tie the game at five-all. Although London scored immediately after a yellow card sent an Aviator off the pitch, Ohio did well to weather the storm of playing down a man, while adding a penalty kick before halftime to go into the break leading, 8-5.

PRO Rugby’s top two teams traded successful shots on goal to open the second half. The first kick came from Ohio’s Shaun Davies, and Magie followed with his own just three minutes later.

The Aviators got halfway to their coveted four-try bonus point when referee Derek Summers ruled Denver had illegally collapsed an Ohio maul that was inching towards the try line, and raised his arm between the posts to signify a penalty try for the home team.

Denver did well to push the ball deep into Ohio territory before a quick set of hands and a well-timed inside line by winger Dustin Croy saw the Glendale Raptor man in for a try to bring the score to 18-13 in favor of the Aviators. Magie was not able to convert Croy’s try, but the former AIG Men’s Junior All-American captain gave the Stampede its first lead soon after by slotting the attempt following Zach Fenoglio‘s try. The Eagle hooker’s excellent support running off Timana Tahu’s linebreak earned Fenoglio his eighth try of the season in the 64th minute.

Minus its captain in Mackintosh following a second yellow card shown to Ohio, the Aviators allowed Denver to extend its lead when the Stampede followed a deep kick with loads of pressure. An errant pass led to a turnover scooped up by Fenoglio, who left the ball for Hanco Germishuys to carry towards the goal line. Two pick-and-drives later, Germishuys was in for a try and a 25-18 lead in favor of Denver.

Needing a momentum-shifting play, Davis intercepted a flat Denver pass, and appeared on his way to his 15th PRO Rugby try before London chased the mighty winger down after Davis had covered 75 meters. The well-timed play by Davis at least got the ball into Denver’s end, and with Mackintosh back on the field the Aviators again used a maul to set up a try – this time by Dylan Fawsitt. The scoring hooker’s Life University teammate, Davies, nailed the conversion and tied the game, 25-25, with three minutes left to play.

Ohio maintained possession while the clock ticked down to zeros, and it appeared fans in attendance were in for PRO’s second sudden death overtime since the two same teams battled beyond 80 minutes in the league’s very first match. Instead, referee Summers allowed the Aviators to kick for touch and use the lineout to launch the final attack of regulation. Patiently moving the ball both left and right, Ohio eventually put the ball in Riekert Hattingh’s hands, with the No. 8 finding a hole and charging over the line for the game-winning score. Davies would add the conversion, but the seven-point victory still allowed Denver to claim a vital bonus point and hold on to its lead in the standings table by a single point.

The other PRO match of the weekend saw the San Francisco Rush hold off the Sacramento Express, 37-34, to finish fourth ahead of its northern California rival.

For more information on PRO Rugby, visit PRORugby.org and the league’s Facebook page, and visit PRO’s YouTube page to re-watch the very best fixtures from this momentous first season of professional rugby in America.