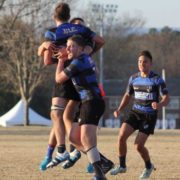 For the time being, the Northern Lights Conference belongs to reigning three-time National Champion Minnesota-Duluth, but that does not take away very much from the second-place team. North Dakota State navigated through a challenging regular season to find itself in the Northern Lights Semifinals against Winona State. The Bison were able to survive Winona State, 17-7, but did not have enough left in the tank to hang with Minnesota-Duluth in the title game the following day.

North Dakota State, however, did not have much time to lick the wounds left by the Fighting Penguins. The team’s runner-up finish in the Northern Lights pitted the Bison against University of Wisconsin-Milwaukee less than a week after putting up a fight against Duluth. With a National Playoff berth on the line, North Dakota State dug deep and downed Milwaukee, 36-12.

The unprecedented season has been thanks in large part to the team’s sacrificing nature.

“Our playing style works to incorporate all 15 players, and our team really buys into that mentality,” said Bison Head Coach Enrique Alvarez. “Everyone is selfless and puts the team above individual success.”

Even though North Dakota State plays a team-wide game, it does have a few key contributors on whom Western State would be wise to keep an eye. The team’s two captains, Addison Czeck and Taylor Neaton, are having terrific seasons. The Bison leaders away from the pitch, club president Michael Zweber and vice president Andrew Karp, are also in the midst of very productive semesters on the pitch.

The competition in the Rocky Mountain Collegiate Rugby Conference continues to get better. Thankfully for Western State, it, too, has improved the past few seasons. After managing just a .500 winning percentage in 2015, the Mountaineers cruised to a perfect, 7-0, regular season record.

“Western State has always had a strong rugby program, but we’ve lacked consistency for a long time,” said Head Coach Tony Luehrs. “These past two years many players have increased their level of commitment to the team, and they have seen their hard work pay off.”

The encouraging results did not stop at the end of the regular season. Western State bested Colorado College in the Semifinals of the Rocky Mountain Playoffs before having its way with Colorado School of Mines in the Finals, 30-17.

The season’s results have proved the Mountaineers can beat teams with a suffocating defense, as well as with their dynamic attack. Scrum half Taylor Egloff and flanker Ryan Johnson tend to lead the charge defensively, while eight man Greysen Lincoln and lock Rupert Wagner continue to find the try zone game after game.

“We know that Western State has a great rugby club and that they are playing some really good rugby right now,” said North Dakota State’s Alvarez. “They have some big players and some fast players. We are going to do everything we can to shut them down and exploit any weakness.”

University of Minnesota-Duluth vs. Colorado School of Mines

There is not anything special in the water in Duluth, Minn. Instead the rugby program in the town has turned itself into the most dominant team playing out of any division at the moment by sheer hard work and determination.

With two National Championship trophies raised in the last 12 months, it was business as usual for the Fighting Penguins this fall. Duluth, again, went unscathed during the Northern Lights’ regular season. In the conference’s postseason competition, the Fighting Penguins dropped St. Cloud, 112-0, then beat North Dakota State in the Final to earn the No. 1 seed in the Midwest Regional.

Of course, competition is always much stiffer at the National Playoffs than it is during the regular season. Still, there is so much firepower intact from last year’s team it seems likely this year’s Minnesota-Duluth team will find itself in the Championship game once again. Trace Bolstad is back in the saddle at fly half. He’s a multitalented No. 10 who can beat opponents with his boot, an accurate array of passes, and a quick step. Bolstad’s favorite targets in the back line are danger men Matthew Martin and Randy Tanaka.

“Though we have some great veterans on the team, the fact that we have so many new players keeps the chase for another championship fresh and challenging,” said Head Coach Mary Swanstrom. “Our veterans are teaching our newer guys what a championship program looks like.”

If it were not for Western State, Colorado School of Mines would be enjoying an undefeated season. The Orediggers fell to their conference rival in the regular season, 34-28, and once again in the Rocky Mountain Conference Championship game. The losses to Western State forced the School of Mines into a play-in contest against Principia out of the Gateway Conference.

In the win-or-go-home fixture, the Orediggers received tries from props Karson Bell and Ty Schroeder, two by inside center Jason Lee, another by eight man Marcus Turner, as well as nine total points coming from full back Jack Martin-Linsley to send Principia packing, 34-12.

The Round 16 battle against Minnesota-Duluth will easily be Colorado School of Mines’ toughest challenge of the year. The tall task might be made slightly shorter thanks to the confidence-boosting win last week over Principia.

Furman has been on the cusp of reaching a National Championship game a number of times in recent years, but has come up just short. This season, after posting a 10-0 record that includes a 44-20 win over UNC-Charlotte in the Southern Rugby Conference Championship game, the Paladins might finally be in position to advance to the Fall Championships.

“We have hosted the Finals for the past three years,” explained Furman Head Coach John Roberts. “Our boys have volunteered for the event and watched all of the games. They have known for some time what a championship team looks like and they have worked incredibly hard to earn a chance to make the final round. Making the round of four and playing it on their home turf has been their collective vision for nearly three years.”

Furman’s vision and effort has always been pointed towards a National Championship run, but now they have the horses in the stable to make it a reality. Up front, tight head prop Adrian Marcogliese is not only one of the best props in Division II, but in all of college rugby.

“He gets our scrums moving and is a strong runner and is very intense,” Roberts said of the senior from Montreal, Canada.

In the back line, sophomore fly half Jeffrey Rein is the puppeteer of the Paladins attack, while senior centers Jacob Milcheck and Adam Miller or the team’s top try-scoring threats.

At the same time, Furman’s Round of 16 opponent, Sacred Heart, is also enjoying its best season in program history. The Pioneers carried a 6-0 record into their Tri-State Conference Semifinal fixture against Rensselaer Polytechnic Institute. Playing against the reigning Conference Champion, Sacred Heart got the better of RPI and advanced to the Nov. 6 title game against William Patterson. In the Tri-State Final, it was Sacred Heart that proved too strong for its opposition, and defeated William Patterson and punched its ticket to the National Playoffs.

Their 8-0 record speaks volumes, but that is not all the Pioneers’ Nov. 19 opponent has taken away.

“I know they are big, physical, and well coached,” complimented Roberts.

In terms of individual standouts, Sacred Heart’s attack all starts with scrum half Matt Calton. The senior from Ridgewood, N.J., used to wear the No. 10 jumper for the Pioneers, but now makes the team’s offense go from the base of the ruck.

“We knew that there were some very good teams in DII,” said Wolfpack Head Coach Brian Ketchem. “We set out to make the best of the situation knowing that some of our regular season games would not be as challenging as some of our competition in the past at DI, but we also knew that we would have a challenge or two during the season, and if we could stay focused and make it to the playoffs that all chances for easy games were gone.”

Indeed the path to the Cardinals title was far from easy. NC State picked up its best win of the season when it beat the Virginia Military Institute, which represented Cardinals in the 2015 National Playoffs, 35-27. The win over VMI gave the Wolfpack the No. 1 seed heading into the conference’s postseason, where challenges only mounted for NC State.

In the Cardinals Conference Semifinals, the Wolfpack climbed out of a deficit to upend Old Dominion, 47-29, before winning a very tough contest against Northern Virginia in the Final, 19-15.

“I think we are a strong and aggressive team,” Ketchem described. “We are smaller than most everyone we play, but we pride ourselves in strong scrummaging and rucking.”

Southern Connecticut’s path to the National Playoffs was not as cut and dry as its Round of 16 opponent’s. The Owls were part of a three-team tie atop the Rugby Northeast Conference along with Bentley and Providence. Having shared identical conference records, and each team carrying a 1-1 record against the others, it was determined that Bentley and Southern Connecticut would move on thanks to their superior point differential in games played against one another.

Still, even after the math was finished, the Owls had work to do. The team hosted a play-in match against York College with a place in the National Round of 16 on the line. The home field advantage did not work to Southern Connecticut’s advantage during the first 40 minutes, as the Owls found themselves trailing, 17-0, at halftime. With its season on the verge of imploding, Southern Connecticut fought back to dispatch York, 31-29.

“I know they had a great season that included some comeback efforts – that shows a lot of tenacity and heart,” Ketchem pointed out when asked what he knew of the Owls. “I have also heard they have some speed that can be a problem on a wider field like Furman’s.”