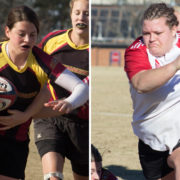 LAFAYETTE, Colo. – It is a busy weekend for the 16 teams still in contention for the 2016 USA Rugby Women’s Division II Fall Championship, with four locations hosting Round of 16 and Quarterfinal matchups Nov. 19-20.

Last year’s Fall and National Champion, Davenport University, will look to return to Furman University in Greenville, S.C., for the Dec. 3-4 Championship event with two wins from the Mid-West Regional on the ground of the Cincinnati Wolfhounds. University of Cincinnati, Illinois State University, and University of West Virginia will also be in Ohio, while 2015 Semifinalist Bloomsburg University, Coast Guard Academy, Eastern Kentucky University, and Saint Michael’s College will compete in the Mid-Atlantic Regional at Kutztown University.

Stay tuned for the Northeast and West Regional previews.

University of Cincinnati vs. Davenport University

Ever since the program won its inaugural match in the fall of 2013 by a score of 72-0, Davenport has been a DII powerhouse. During the 2015-16 season, the Panthers finally fulfilled their goal of winning a National Championship, but they did not stop at just one.

Davenport’s National Championship exit in the regional rounds in the spring of 2014 and Fall Championship exit later that year only served as points on the timeline of progress. Determining a schedule layout that includes matches in 15s and the Olympic sport of Rugby Sevens, the varsity program from Grand Rapids, Mich., swept through the first three rounds of the 2015 Fall Championship without conceding a single try. Bloomsburg University and Winona State would test the Panthers’ title credentials but could not pry the trophy from them, while University of Southern California found itself in the way of Davenport’s first National Championship earlier this spring.

Within weeks Davenport had also claimed the 2016 USA Rugby College 7s National Championship, and sent four student-athletes to Utah for potential selection to the USA Rugby AIG Women’s Collegiate All-Americans. Danielle Ordway, a dynamic back that credits her teammates for her own try-scoring prowess, ended up making the team. Wing Ashlee Byrge was selected to the All-American Sevens team over the summer, as well, but transferred to Central Washington University.

The fall season, if not on the lighter side, has been pretty standard for the Panthers – five wins from six, a combined 10 points conceded in the victories, and a bye through the play-in round. They have not played at home since late September, however, and will not see the DU Turf Field until their return from Cincinnati this weekend.

Home field belongs to the Bearcats in Ohio Saturday, with Cincinnati Rugby Football Club’s Brimelow Fields the location of the Mid-West’s Regional Round of 16 and Quarterfinals. The venue is home to University of Cincinnati’s rugby team during the season as well as high school teams in the area, and Bearcats Head Coach Craig Russell said the support from the Wolfhounds has been immense over the years.

“The girls will be playing on the field they know,” he said of Brimelow Fields, where the Bearcats are undefeated this fall. “We don’t have to endure the travel. It’s all a win-win positive aspect that you’ve got these young players and they’re able to have their parents and friends there supporting them.

“With any team, they play better when on their home turf because they know where things are and they have the support there.”

The team is young – it lost the majority of its seniors to graduation in the spring. Around 40 student-athletes showed up to training the first night of the fall season, though, and the interest has waned only slightly in the weeks since. Most of the younger players are just starting out with rugby, bringing only athletic ability and fitness from sports like soccer and lacrosse.

“The older girls, the veterans in the team, have been really good with additional coaching if they’ve needed it and with sharing time in-game,” Russell said.

The newness of the team allowed Cincinnati to focus on the present throughout the season, looking ahead only to the impending fixture. Once the matchup for Saturday was determined it was time to focus on the Panthers, who knocked Cincinnati out of last year’s Fall Championship playoffs in the Quarterfinals on the way to the title.

“We know we’re going in as the underdogs, but that, sometimes, can work to your advantage,” Russell said. “We’re just taking everything back to basics bearing in mind the strength of Davenport, and also looking at their weaknesses highlighted to us. We’re just going to go down there, get good rest, and play rugby the way we’ve been doing it.

“Home field is a big advantage and I really feel, being the underdog team, that we’re going to surprise a few people. I say that not in a cocky manner, but I think we’ll go out there and surprise a lot of teams with what we can do.”

Illinois State’s Illinois Conference championship was just one step towards qualification for the 2016 Fall Championship playoffs. The second was winning a knockout match against Grand Valley State University, which it did in a narrow, 19-17, contest last weekend. The team had lost one DII match all year – a four-point defeat to University of Missouri – prior to the loss to DI Conference champion University of Illinois Oct. 30.

It has been a long road since the school’s exit from the 2015 playoffs at the Round of 32, but it is more playoff experience than West Virginia will bring into Saturday’s Round of 16 matchup. The Allegheny Conference champion did impress in its 75-5 play-in win against St. Joseph’s University, however, after finishing the regular season undefeated. The likes of Indiana University of Pennsylvania and Slipper Rock University have playoff experience to boast, and felt the wrath of the Mountaineers on two occasions each this season in the three-team conference.

Bloomsburg may have lost influential center Nicole Snyder following its Semifinal exit at the 2015 Fall Championships and runner-up campaign at College 7s earlier this spring, but it was not just her that brought the team to the big show. In the offseason, the Huskies lost more senior support that had “carried” the program in the first two years of Head Coach Kevin Castner’s tenure.

“We have a big junior class that was taken care of the first two years,” he said. “They had to discover and become leaders – the whole process of continuing to work on our culture, make sure we’re doing best by example on and off the field, and having those players learn from the prior players to leave this place in a better position. It’s been a huge transition but a fun one to watch as we continually build up for more postseason action.”

Even if the Huskies did not keep the specific Davenport matchups from the previous season in their minds, there was a sense that that level of play required improvements. The sevens season in the warmer part of the year was instrumental in terms of fitness and skills, especially for the younger student-athletes newer to the sport. In the months since, Castner said there were more freshmen on the field than not, an impressive statistic considering the 6-0 MARC record and the fact Bloomsburg did not concede any points until the final weekend of the regular season.

At the end of the conference semifinal game against St. Joseph’s, the Huskies had 12 players on the field with a semester or less of rugby experience.

“It’s really about the culture that has been set up for success,” Castner said. “It doesn’t matter what your experience level is; it’s that you’re willing to put the hard work in. If you get the results, you’ve earned it – not because you’re an upperclassman. It’s having the right atmosphere, the right culture, the right beliefs for the team to buy into. Without that we’re not going to be successful at all.”

Bloomsburg even replicated the doubleheader style of the national playoffs by following Saturday games with intra-squad scrimmages Sundays, knowing the depth the rigorous season created would see the Huskies through pressured adversity come November.

“It’s all about how to wisely use the roster without sacrificing play on the field,” Castner said. “They were able to rely on their experiences last fall knowing how those days work. Our overall roster are stronger than they have been in past years, too, which is something that benefits us.”

Through the first six weeks of the New England Wide collegiate Rugby Conference, Coast Guard was not really tested. One shutout preceded another until the Week 5 matchup with New Haven University – a 41-5 win – before University of New Hampshire kept the cadets to their lowest scoring output of the season.

University of Maine was also shut out by the cadets in last weekend’s play-in round, advancing Coast Guard to the Round of 16 for the second consecutive season. The Bears will be wary of this Saturday’s matchup considering its exit from last year’s playoffs at the same stage to 2015 Semifinalist Vassar College.

Rebuilt over the course of the past few seasons, Eastern Kentucky has risen to the level of competitor in DII, beating the likes of Cincinnati and Kutztown to reach the Fall Championship Round of 16. It is the second consecutive year the Lady Colonels have gotten this far, and who can blame them for losing to Davenport in 2015?

Still, it will not be enough to just participate in the Round of 16, especially after finishing second to Cincinnati in the Ohio Valley Conference.

“We have quite a few of the same players from last year’s team who have developed immensely in the past year,” graduate player-coach Kelsey Basham said. “We also have five rookies who have earned a continuous spot in the lineup for each match since the start of the season. We were able to learn so much from our competition with Davenport last year and I think that loss has really stuck with us as a way to continue to build and develop our program.”

The early season defeat of the Wildcats could not be replicated in the conference championship, with the Lady Colonels dropping their first match of the season before their play-in game against Kutztown. Unlike Saturday’s opponent, they played last weekend.

“We were looking for a way to redeem ourselves after the U.C. game and we also were excited to compete against a team whom we have never had the opportunity to play,” Basham said. “We were able to take what we learned from our loss and really drive home some of the main technical things that we struggle with moving forward.

“We were also able to take away quite a few lessons from the match against Kutztown based on their style of play that will hopefully be effective in competing with Saint Michael’s this weekend.”

Freshman center Ashley Johnson and three-year veteran full back Sheila Velasco will be threatening with ball in hand this weekend, while props Gabby Gude and Bre’li LaFever will give Eastern Kentucky the edge it needs in the forwards.

Saint Michael’s play-in game was forfeited, giving the team minimal respite following a grueling, 10-week season. With matches against 2015 Fall Champion Connecticut and perennial varsity program Bowdoin College crossed off on the calendar, the Purple Knights will take their 8-2 record, Rugby Northeast Conference title, and rested legs into the Round of 16 matchup with Eastern Kentucky.