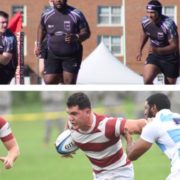 If you are unfamiliar with the Bowling Green Rugby program you are probably not paying too close attention to college rugby. The Falcons recently wrapped up their 36th consecutive Mid-American Conference Championship – yes, 36 straight.

“Winning that many in a row is a credit to all the players who have come through this program and have understood what that record means to the guys who came before them,” said Bowling Green Head Coach Tony Mazzarella. “I also assume that it is a little bit of a feat that every current player never wants to be on the team that loses one.”

With another MAC title in its kit bag, Bowling Green now has eyes on advancing to the Fall Championships – effectively the National Semifinals for D1AA. Surprisingly, the Falcons have not reached a Semifinal since going down to eventual National Champion Central Florida in the 2014 D1AA Semis.

Like every great team, Bowling Green is led by a pair of outstanding captains. Sean McFarland is the team’s vice captain and is a huge asset in the front row, while fly half Nick Ross wears the ‘C.’ Ross is fortunate to have Adam Regini just inside of him in the No. 12 jumper. Regini is a distributing inside center who has not had an injured Mike Powell to target but does have freshman Bobby Kiskin, who has stepped up as the team’s playmaker on the outside.

Mount St. Mary’s is not quite the known commodity that Bowling Green might be, but it is a team with championship pedigree. After winning the 2016 National Small College Rugby Organization (NSCRO) National Championship, the Mountaineers took a step up in competition by joining the newly-formed Chesapeake Collegiate Rugby Conference for its inaugural season.

Top to bottom, the Chesapeake Conference provided teams with several competitive games, including Mount St. Mary’s. The Mountaineers dropped a two-point fixture to Virginia Tech, but won tight contests against James Madison and Maryland. The team is battle tested and should have little trepidation heading into its first D1AA Playoff.

“What experience they may lack at this level they will make up for in having made deep championship runs,” Mazzarella said of his opposition.

James Madison has been a program on the move in recent years. After reaching the 2014 DII National Semifinals, the Dukes challenged themselves by moving up to D1AA’s Keystone Rugby Conference and did very well in taking home the conference championship. This season, the Dukes left for a brand new competition – the Chesapeake Conference – that proved a better fit both geographically and competitively.

“The inaugural season of the Chesapeake Conference has been a great success,” said James Madison Head Coach Mark Lambourne. “The quality of competition and the fact that there was a storyline with every game made it an enjoyable season.”

A dedicated coaching staff and an impressive roster of players is not the only reason the team keeps winning while its rugby landscape continues to evolve. James Madison has a knack of making necessary adjustments given its opponent.

“Our strength is our capability to adapt our game to the game plan for the opposition and also during the game, if needed,” Lambourne explained. “We are as comfortable playing a running game of rugby as we are grinding it out with the forwards.”

Apparently the Dukes’ ability to play a multi-faceted game is not exactly a secret. Their Quarterfinal opponent, Lindenwood-Belleville, has been impressed with their notoriously-physical style the Lynx liken to fellow Mid-Atlantic teams like Salisbury and Kutztown, but know full well that James Madison is not a one trick pony.

“They love to hit, run, and hit again. And they’re good at it,” noticed Lindenwood-Belleville Head Coach Patrick Clifton. “Coach Lambourne has also added a lot of structure to that tenacity, which makes the Dukes a tough out. Mix in incredibly talented players like Mo Katz, who has a great motor and can beat you in so many ways, and that’s why they’re conference champs.”

In similar fashion, Lindenwood-Belleville – a brand new varsity program that made its debut a little more than 14 months ago – is a team that was playing in the Division II ranks recently. The Lynx played their inaugural season in DII and did quite well by reaching last year’s Quarterfinals. The remarkable results in just its first year, and ability to recruit ready-made rugby players, now has the team playing as a D1AA Independent.

Not representing a conference, Lindenwood-Belleville had the freedom to schedule a diverse calendar of matches that included five games against teams from D1A Rugby. The five fixtures only produced one victory, but the competitiveness of the Lynx against some of the country’s very best made their dominant four-game winning streak in October less than far from surprising.

“Everyone needs positive reinforcement that the effort they’re putting in is paying off,” Clifton said. “Even in the most recent game where we gave up 60 points, we were able to pull a lot of positives away from it. But to beat some really respected programs like we have this year has been as beneficial as anything else.”

James Madison knows perfectly well about the level of competition Lindenwood-Belleville has been up against, but that is not all the Dukes have taken away from the Lynx.

“We know they are resilient and have a good defense as they limited the score against them by some very good teams,” said Lambourne. “They have a strong running center and are comfortable with their forward game. It should be a good match.”

No D1AA team has had a more impressive fall than Notre Dame College. Coming off of a defeat to UC Davis in the 2016 D1AA National Championship, a more veteran group of players returned to the fold, and the results have been outstanding.

As an Independent, Notre Dame College filled over half of its schedule with games against teams from D1A Rugby – and beat them all. Most impressive were the two victories over programs ranked in the top half of the Canterbury D1A Rugby Top 20 – Davenport and Indiana. Event more impressive is that both of those wins were road games for the Falcons.

“Notre Dame College have an excellent group of athletes and are very well coached,” said Syracuse Head Coach Robert Wilson. “We need to improve our defensive structure, or they will tear us apart.”

Wilson and the Orange know just how dangerous the Falcons can be. The two teams squared off last November in a very tight ballgame that Notre Dame College squeaked out, 33-28. The one-try defeat would give the Orange confidence, one would think, but the team understands that the Falcons have returned all but one starter from the first 15 that faced the Aggies in the 2016 title game. Meanwhile, Syracuse is missing a few of its best players due to injury. Five players from its starting forward pack have been put on the shelf for the season, which has made on-field scenarios especially difficult considering the Orange had pegged its set pieces to be its strength at the beginning of the season.

“This has provided opportunities for new and young players . . . We have been improving throughout the season but this level of competition will be a stretch,” admitted Wilson.

In its most recent tune-up for Playoffs, Notre Dame College squared off against fellow D1AA Independent and Quarterfinalist Lindenwood-Belleville. After 40 minutes, the Falcons only led by three points, but showed off its dynamism between both its forwards and backs on its way to outscoring the Lynx by 14 points in the second half.

A gradually-improving Cincinnati program led to its first-ever appearance in the MAC playoffs in team history. From there, Cincinnati easily won its first conference postseason game by downing Western Michigan, 41-15.

The MAC Finals, however, presented a much taller task of stopping Bowling Green from winning its 36th consecutive conference championship. Although an upset looked promising when the Bearcats trailed by just two points at halftime, the Falcons were simply too strong and ran away with yet another conference title.

Cincinnati has used a combination of consistent forward play and electric back-line play to guide the team to its most successful season in recent history. A pair of props, Nathan Dixon and Kevin Sherry, more than hold their own in the set piece and have a nose for the try line, while winger Grant Gallagher has excellent pace and potential to score every time he touches the ball.

St. Joseph’s admits to not having the most detailed scouting report on the Bearcats, but given the strength of their conference, it is a certainty they will not be an easy out.

“I don’t know much about Cincinnati, but have heard they have done some good things in the MAC,” said St. Joseph’s Head Coach Daniel Yarusso. “They have won some close games, so they are battle tested and will be a tough team to play in the first round.”

Like Cincinnati, St. Joseph’s is having its best season in a number of years. The Hawks beat every team put in front of them until last week’s loss to D1A Rugby’s fifth-ranked Pennsylvania State University. The challenging fixture preceding the Playoffs was not scheduled to put the Nittany Lions on upset alert, but to point out the team’s weaknesses that needed to be addressed before the East Regional.

“Penn State is a very good team, and we were grateful for the opportunity to play them,” Yarusso said. “Although there were some positives in the match, we were exposed in some of the areas of our play and we are working this week to make the necessary corrections as we know there will be some quality teams out in Pittsburgh.”

Prior to its defeat to the Nittany Lions, St. Joseph’s had held four of its opponents to 10 points or fewer while scoring at least 40 points on four different occasions during the same time frame.

In terms of individual standouts, the Hawks have their own pair of capable props in Ed Flannery and Michael Weber. In the backs, the strength is in the back three where Chris Cucio, Connor McAuliffe, and Greg McTiernan all possess the ability to get behind a defense.