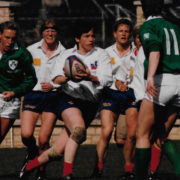 The Women’s Eagles had reached their second Women’s Rugby World Cup Semifinal in as many tournaments in April of 1994 without conceding a solitary point in three matches in Scotland. Their results were so lopsided it seemed the U.S. was on another level competitively, and it all happened with the looming issues of an underfunded, un-sponsored tournament that had changed hosts within weeks of the competition beginning.

“The players were super motivated,” Eagles (’93-’98) Head Coach Franck Boivert said. “They were paying their own airfare; they were doing the fundraising themselves. I have a lot of admiration and respect for their dedication and the sacrifices they were making. We had almost no support whatsoever at the time but the players’ enthusiasm and dedication was just amazing.”

The offensive success can partially be attributed to Boivert’s tactics, but even he conceded a game plan is only as good as the players executing it. Against Wales in the ’94 Semifinal in Galashiels, the Eagles dominated their opposition, though not quite to the extent they had their pool and Quarterfinal opponents. Holding a sizable lead throughout the match – thanks in no small part to the nigh-unstoppable center, Candice Orsini, and Jennifer Crawford’s five tries – the U.S. continued its successful barrages on the try zone in the 56-15 victory.

“Flamboyant” was Boivert’s chosen term to describe the play of his team. In a scathing article on the women’s game ahead of the Final in England’s Sunday Times, one writer briefly spun the story positively to concur as much, stating the American back line was “the only real gold in a tournament of dross” and “[proved] that women can play rugby to a very high level.”

“As soon as we had clean ball and spun it out we would score – even from the goal line.”

The three tries given up by the Eagles highlighted the aspects of the game that would doom them in the impending Final, however. Wales pushed two scrums over the line and caught the U.S. off-guard with a quick-tap penalty for a try. Wales’ pace of play in the latter stages of the game was reminiscent of the England encounter a year prior, in which the Eagles’ weakness was exposed.

“The incredible talent of our backs was hiding the weakness of our forwards,” Boivert said. “The Welsh coach realized during the second half what our weak point was and that’s when they attacked us – dragging mauls and things like that.

“Before that we were incapable of assessing our weaknesses. The Welsh really tried to push us around in the forwards. I sat down with [assistant coach] Joe [Kelly] afterward and said we’d have to work very hard in the scrum in order to be competitive [in the Final], but it was too little, too late for us to correct that.”

Indeed, it was too late, for a hungry English team that had doubled its efforts following the ’91 disappointment was more than prepared for the Eagle challenge despite a lackadaisical effort in its own Semifinal against France. Even though the U.S. found offensive successes with ball in hand – the Eagles scored 23 points in the Final – England’s plan of attack was superior to pull out a redemptive, 38-23, World Cup win.

“Even in the running game . . . every time we played out the back we were able to beat them,” Boivert said. “But they kept it tight and used the kick to occupy our territory. Then, when we went to scrum, they would destroy us. And that was it.”

The Eagles had reminded the rugby world that beautiful attacking rugby was worth watching – and what it looked like with the newly-professional men’s version somewhat regressing – even in a time when the women’s game was not deemed to have the “quality” required for equal sponsorship or media coverage as the men’s game. Their second consecutive World Cup Final appearance carried near as much weight upon their return to the States as the first, but created more fervor amongst the pool to reach a third.