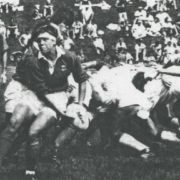 Only 47 rugby matches between international women’s sides had been played by the time the first World Cup rolled around. It was not unfair for local press to qualify England and New Zealand as favorites prior to that April, as neither had lost a match. Across the pond, those named to the USA Eagles’ travel squad were training as though every opponent was the keeper of the Cup.

“I used to call Tam [Breckenridge] every day that we didn’t work out together or have practice, and I’d say, ‘What did you do today?'” Tara Flanagan, Breckenridge’s “locks from hell” partner, recalled. “She’d tell me whatever her workout was and I’d say, ‘Tam, right now, somewhere around the world, someone in New Zealand is practicing and training to try and beat us. We can’t let that happen.’ I literally called her every day, or she’d call me: ‘Someone over there in England right now – well they think they’re better than us. We’re going to have to beat them.’

“That’s what we talked about for months.”

Upon their arrival in Cardiff just a few days before the tournament was set to begin, the Eagles began two-a-day training sessions in the wet conditions to which the British Isles are accustomed. Flanagan likened the athletes to “battering rams,” throwing their bodies around under the direction of coaches Kevin O’Brien and Chris Leach, who were not only preparing the women for their toughest competition to date, but testing combinations on a match-to-match basis.

The rain shifted into a form akin to sheets when the U.S. ran out onto the pitch against the Netherlands in its first pool match April 6, accumulating enough water on the grounds to reach players’ ankles. Needless to say, it was tough slogging for both teams in the slippery conditions, with the Eagles coming out on top just 7-0 when it could easily have been a margin of more than 50 points based on the teams’ skill levels. Scrum half Barb Fugate was forced out of the tournament with an early injury, however, bringing on Beantown’s Patty Connell in her debut to lead the team through the remaining games.

Flanagan, M.A. Sorensen, and Julie Thompson – following on from seven Eagle debutantes against Holland – played their first international tests four days later against the U.S.S.R. in the final pool game in Wales, a 46-0 thrashing. The U.S. won its three-team pool to advance to one of two Semifinals, where an undefeated New Zealand awaited not eight months from the 9-3 encounter at RugbyFest. 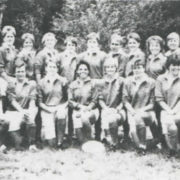 Prior to 1995, rugby union around the world was an amateur sport. This was especially true for the women’s game, which largely took a back seat to the men in terms of governing support. France and the Netherlands competed in the first international women’s rugby match in 1982 and the second a year later before the likes of Belgium, France, Great Britain, and Italy began traveling for tests in the years to follow.

The United States, whose women’s game had flourished, comparatively, for more than a decade, went north to British Columbia in 1987 for its first international friendly against border rival Canada. The match was the first such “test” to be held outside of Europe and the U.K. The CanAm became an annual event through 1989 – and an annual victory for the Eagles – until the U.S. sent a team to New Zealand for RugbyFest in 1990.

RugbyFest was the first tournament to feature national teams from multiple continents, with the Netherlands and the Soviet Union making the jaunt south of the equator to participate. The U.S. acclimated itself to the tournament host country with a couple of warm-up games against local opposition – both victories – and opened the round-robin pool play with a shutout of the Dutch. Playing five games in five days with the warm-ups included, the U.S. lost a six-point match to New Zealand before finishing off the trip with a shutout of the Soviet Union. Seven Eagles were named to a World XV side that took on New Zealand to close the tournament, as well.

Despite the positive results, the women’s national team was not financially compensated for the players’ time, nor was the cost of housing and travel subsidized. In the face of the adversity, the women continued to train and prepare for what was to be the first Women’s Rugby World Cup. The Americans’ performances made waves north to the established rugby nations, as did the news the “locks from hell” were on their way to Wales.