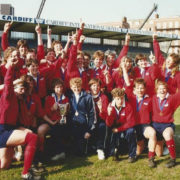 There were several players included in Kevin O’Brien’s World Cup squad that had not traveled to RugbyFest in 1990. The only things they knew of New Zealand’s team in Wales was what they had taken from the Kiwis’ two victories in Cardiff, what the coaching staff drilled into the Eagles in training, and that there was unfinished business between the two nations on the field – namely the matter of redeeming the first and only loss in the program’s history.

“I’m not dismissing [England], but I think for many of us that was the Final,” Tara Flanagan recalled, referring to the Eagles’ eventual Final opponent. “Those were the two best teams in the tournament. That game was just electric.”

Flanagan and second-row partner Tam Breckenridge had been asked to bulk up prior to the World Cup, specifically to counter the sizable pack of New Zealand. The Americans had used their physical might in conjunction with their skill set to get the better of their opposition, but Leach and Co. recognized New Zealand had already bested the Eagles despite these strengths. On match day in Wales just two days from the culmination of pool play, the coaching staff highlighted the need for “total commitment and pressure” and to remember the two Ds: “Decimate the opposition with devastating tackling.”

New Zealand missed two penalty-kick opportunities to the U.S.’s one in the early goings, and was eventually forced into playing a territorial game through the air in the face of the Eagles’ seemingly endless defensive blitz. The Eagles took a 3-0 lead into halftime from fly half Chris Harju’s successful kick, and began to exert some semblance of dominance in the second half. Hall of Famer Patty Jervey’s knock in-goal kept the score from widening, but Barb Bond finished off one of the most impressive tries of the entire tournament to see off New Zealand, 7-0.

“We scored a pushover try against their pack,” Flanagan said. “Their pack was ferocious. We broke their hearts. I don’t think they knew how to come back from that.”

Onto the next, then, as the Eagles exorcised the demons. Unbeaten at home and abroad, England strolled into the April 14 Final following a 13-point shutout of a strong France side. Though not overlooked by the U.S. – after all, there was no “next game” to come – England caught the Eagles off guard in the first half. Almost as if they had their backs against a wall, the Eagles conceded territory and possession, allowing a team to score against them for the first time since the 1990 clash with New Zealand.

The U.S. quickly grew into the game and were rewarded by Harju’s late-in-the-half penalty kick to only be down, 6-3, at the break. It took less than five minutes in the second half for the Eagles to take the lead as the supremacy grew, and Breckenridge and Flanagan helped finish off the match by setting up Patty Connell – uncapped just eight days earlier – for the 19-6 try.

“It just took us a little while to get our heels under us and get moving,” Flanagan said. “But I watch that tape now, and Tam wasn’t going home without a world championship. Patty Jervey, Jen Crawford; everybody upped their game. No one ever panicked.

“When we were down we knew we were going to get this done. We just knew. No one ever said it – there wasn’t a level of arrogance – but you just knew we were the better team and could win it.”

Win it they did. The Women’s Rugby World Cup 1991 victory remains the only major trophy captured by a senior U.S. national rugby team (excluding the men’s 1920 and 1924 Olympic triumphs). A visit to the White House would follow several months later. A proper reunion, however, did not occur until 2016 at the country’s flagship international women’s rugby event, which would not have been possible without the successes of those Eagles and the participant countries of the inaugural WRWC.

Recognize these faces? Members of the 1991 #wrugby World Cup Championship team have reunited at #Atlanta7s!! pic.twitter.com/OL5wwFbAbs