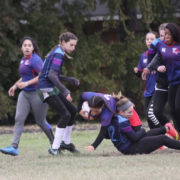 Women’s rugby teams of all ages and from every corner of Texas will gather in San Antonio this Saturday ahead of the USA Men’s Eagles match against Uruguay’s Los Teros, showcasing the growth of rugby in Texas.

“The sport has really taken off here, for a number of factors,” Madonna said. “NCAA inclusion [as an emerging sport] and Team USA’s success in the Olympics this summer has really helped us market high school girls’ rugby. Girls’ lacrosse and soccer here in Texas have huge cuts once you get to high school. Most girls just want to continue competing with their friends. Rugby has stepped in and provided a great opportunity for those players. We’ve had several teams form whole cloth that way.”

In order for new players to find the sport, visibility is essential, and not just from the Olympic Squads. Over 20 different squads will take the fields Saturday to highlight the emphasis of women’s rugby in Texas, and that is sure to help family members and friends experience the great sport of rugby. The festival serves as the first leg of the World Series-style HS Girls Cup. All 14 teams will vie for points towards the May 6 State Championship to be held in North Texas. High school matches kick off at 8 a.m. CT and continue until 2 p.m.

Along with the cup matches, the festival features middle school matchups between Dallas and Houston, the UTSA women against the Lonestar All-Stars, and the San Antonio Riveters facing the Austin Valkyries at 11 a.m.

Rugby Texas will be hosting a free non-contact flag rugby clinic for any child who wants to learn the sport from 12 to 2 p.m. The clinic and all matches will take place at South Texas Area Regional Soccer Complex, a short walk north from Toyota Field at 5103 David Edwards Dr, San Antonio, TX 78233.

Along with the opportunity to pass and kick a ball in rugby inflatables, visitors can watch any of the matches going on and stick around for the Eagles-versus-Teros match, which kicks off at 3 p.m. CT at Toyota Field. Tickets can be purchased via Ticketmaster.

For more information on the weekend’s events, head to www.rugbytexas.org.