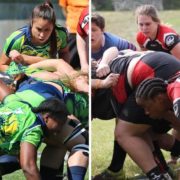 GLENDALE, Colo. – No two clubs in the country have shown the amount of exponential growth on the pitch over the past few years as the finalists of the 2017 USA Rugby Women’s Division I Club National Championship. One only has to look back to 2015 when both the Life West Gladiatrix and Raleigh Venom were competing at the D2 level. Now, the teams are only days away from playing for women’s club rugby’s top prize at Infinity Park in Glendale Saturday, June 3.

The 2017 Women’s Division I National Championship match between Life West and Raleigh will kick off at 5 p.m. MT and be shown live on The Rugby Channel.

Even with this year’s jump to D1, however, postseason results have looked similar to last year’s run to the D2 title. Playoff wins a season ago came by an average of 76 points per contest, while this year Life West has been nearly as dominant, downing its postseason foes by nearly 64 points per match.

“We know that many score lines have flattered us this season, but they don’t often take into account the times we have been placed under pressure by teams within games,” said Life West Director of Rugby Adriaan Ferris. “We have learned from those in-game incidents and believe we are well prepared for what is to come on Saturday. We are very conscious of not letting complacency creep into our preparation and game and we know what is at stake – we know the challenge ahead of us. Raleigh won’t simply hand the game to us on a platter. We have to earn the win by our efforts and performance.”

Spectators will be quick to point to the host of Eagles on the Gladiatrix roster as an explanation for their rapid rise to rugby stardom. However, some of Life West’s lesser-known players have played just as vital of a role in bringing home the team’s first National Championship 12 months ago, and why they are 80 minutes away from back-to-back titles.

Aubrey Huey, Morgan Rovetti, and Mele Taumoefolau have been as consistent as any member of the forward pack that boasts four internationals. In the backs, center Halo Deters and scrum half Nikki Kenyon have been every bit as dangerous as their Eagle teammates in the back line.

Raleigh’s climb to the top of club rugby was not quite the overnight success of its National Championship opponent. From 2005 to 2011 the Venom won four National Championships – in Division II. It was not until the completion of the 2015 season that saw Raleigh post a 9-1 regular season record out of the Mid-Atlantic did Raleigh officially set its sights on Division I competition. The club outdid itself in its first year of D1 ball by playing undefeated footy before losing in the National Semifinals to Chicago North Shore. In year two playing in Division I, Raleigh did not stumble in the Semifinals. Instead, the Venom avenged two April losses to Northern Virginia by topping their conference rival, 18-10.

“We knew we went away from our structures and left the door open for a good team like NOVA to take those matches,” Raleigh Assistant Coach Neil Pietila said of the pair of losses leading up to the National Playoffs. “Facing NOVA in the Semifinal was about getting the players’ buy-in and executing what we do each week in practice. They were all in with everyone putting out max work rate, and we came out on top when it mattered.”

There is a lot of muscle throughout Life West’s lineup, which may just suit a Raleigh side that prides itself on speed and fitness. The Gladiatrix are not likely to leave too many gaps for the Venom to run through, but if Raleigh can use its team speed to exploit the space its forwards create, then the team from North Carolina should find success.

“Our strength is getting on the front foot through our forwards and then playing a wide or a tactical kicking game from our back three,” Pietila described. “We are very good at spotting space and getting the ball in the right places.”

A big reason why the Venom can shift the ball so quickly to the outer channels is the play of their Nos. 9 and 10. Scrum half Tonya Fletcher and fly half Chelsea Garber work extremely well together and drive the team’s attack. If the ball does not make it out wide, it is probably because standout inside center Jen Larrimore broke free from the midfield.

Defensively, Raleigh has taken note of Life West’s offloading abilities and are focused at meeting the Gladiatrix’s strong runners rather than wait for them.

“Life West has some great players and a handful of Eagles,” noted Pietila. “They are fantastic runners and the way they keep the ball available is impressive. I think if we find ourselves catching them on defense they will easily find gaps and put points on the board.”

Although Raleigh is proud of the work it has put in to be just as fit as any opponent it faces, the Gladiatrix seem to think the Venom will be just as much of a threat in the set piece and in the tackle area.