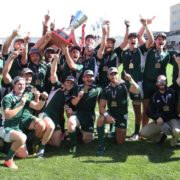 Jonathan Poole scored thrice for the Running Eagles in the span of 30 game minutes, while Most Valuable Player David Gannon dotted down twice in the first half as Life built a 24-10 lead through 40 minutes. The D2 Championship is the first for Life, but not the first for the program at all levels, with several players unavailable for the Final due to Life commitments elsewhere.

“It’s been a long season,” the MVP said after the post-match celebrations. “It just feels great to get it over the line. Couldn’t have done it with a better group of lads.

“A lot of our younger players will go on to bigger things and hopefully with the D1A team next year. I’m so proud of them working hard for each other; all year it was a staple of our season.”

The Running Eagles preferred an expansive game plan from the get-go and used the entire field of play to their advantage, be it with kicks or ball in hand. Without the ball early, however, they fell out of favor with the match official, and conceded the first points of the game via Bombers fly half Keegan Neal’s fifth-minute penalty kick. The Bombers found themselves without the ball for the majority of the ensuing 10 minutes, however, and conceded two tries in that span.

Life No. 8 Gannon dotted down from a five-meter scrum following his teammate being held up in-goal for his side’s 7-3 lead five minutes before Poole beat the St. Louis defense by himself to extend the lead to 12-3 in the corner.

The Bombers defended the Life backs doggedly, keeping a scoring opportunity created by Philip Laurence’s kick return in the 18th minute from finishing across the try line. Just a few minutes later, however, the continued pressure pushed a five-meter scrum forward, where Gannon barely had enough time to pick up the ball before he found himself in-goal, 19-3.

Poole’s second came from another set piece win by the Running Eagles, who had a lineout inside St. Louis’ 10. The ball went one way for Ryan Hercules to break tackles at the 22 before it came back to the touch line for the winger’s try. The Bombers found their feet in the dying minutes of the first frame, and Eric Hinson saved a loose ball from a St. Louis scrum near the try line to give Mark Menne the final offload for the try, 24-10.

“You can see in the first half we were a bit touchy,” Gannon recalled. “Credit to them: they came at us right from the start and put us under pressure. They kept fighting to the end, kept carrying, beat us around the corner. We were lucky to get a couple breaks, but we’ve got great finishers.”

St. Louis had momentum on the other side of the halftime whistle, but found the game out of reach before it could tick the scoreboard again. With a man-advantage from a 45th-minute card shown to Life prop James Abbot, the Bombers’ fly half was a tad too content with his pass behind the Running Eagles’ 22, as Jacob McFadden intercepted it and found Poole in support for the hat trick, 31-10.

Laurence almost had a try of his own 10 minutes later, chasing a kick and pouncing on the quick throw only to be held up in-goal. A neat inside line by Schuyler Whelan from the five-meter scrum was all it took for the dot-down under the posts, 38-10. A set-piece move from a lineout in the 62nd minute saw Marcus Walsh over the try line, and Hercules’ break from the ensuing restart freed substitute Weston Mollo for a 50-10 score line before the Bombers made the final more respectable, 50-24, with late tries from Neal and Colin Fitzhenry.