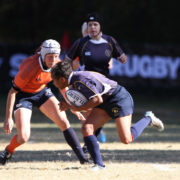 Last weekend’s third round of play means the Women’s Premier League is halfway through the regular season. When the league resumes on Oct. 8, the field will be chasing the two conference leaders – Glendale and New York – that are still undefeated.

New York confirmed its contender status with a 42-15 win over Twin Cities in Minnesota. The Amazons are now 2-1 in the Red Conference and took the first lead of Saturday’s game through an Anna Brown try. Ten minutes later flyhalf Mary McCarthy slotted the first of her three penalties, and then added the first of her four conversions after fullback Juliette Conte scored, 10-5. Twin Cities wing Kate Stephens scored early in the second quarter, but the visitors took the 18-10 halftime lead after a McCarthy penalty and Justine DeBruzzi try.

New York outscored the Amazons three converted tries (and a penalty) to the Twin Cities’ one. Stephens scored her second try of the match, while New York lock Alycia Washington crossed twice and No. 8 Evi Ashenbrucker once.

“The game against New York was very physical and very fast on both sides,” Twin Cities captain Sylvia Braaten commented. “Where we fell short was with missed tackles and turnover ball. New York did a great job of poaching our ball and taking advantage of those turnovers.

“We will be focusing on our next game, but are looking forward to another physical battle against New York in three weeks at Randall’s Island,” the Eagle added.

“We’re happy with the result but the score line flatters us in many ways,” New York coach James English said. “There were huge parts of the game where the Amazons put us under a lot of pressure. They were in control in the first 15 minutes and it took some to find our feet and feel our way into the game. The momentum swung a little at the end of the first half when we nicked a couple of tries.”

On the other side of the Red Conference, Atlanta celebrated its first home match with a 52-19 win over the D.C. Furies. The Mid-Atlantic side wanted its first win of the season, too, and forced the Harlequins to lay chase. In the first 10 minutes, D.C. put outside center Karoline Walter and flanker Katie Thomen into the try zone. No. 8 Maggie Olney added the conversion.

“That first 15 minutes they were right in the game, and they never stopped fighting,” Atlanta center Ros Chou said. “They were especially good at putting pressure defensively around the breakdown … but overall, we had stronger carries in the forwards and backs. I wouldn’t say, ‘shaky,’ but we had a slow start and it took some time for us to get in the game. But then we got some momentum going in the way we attacked and starting making sure that we were more aware of our defensive assignments.”

The Harlequins answered D.C.’s points with tries from fullback Lara Gartner and prop Maggie Craig. Two conversions from Irish flyhalf Laoise O’Driscoll – who kicked six two-pointers and a scored a try – gave the home team a 14-12 lead that it wouldn’t relinquish. Before game’s end, wings Meredith Whitten and Madison Levy, outside center Mo Compito, O’Driscoll, Craig and Gartner all scored tries. D.C. accounted for the final score of the game, as Thomen got her second of the day, converted by Olney.

“We’ve had a few young backs really up,” Chou said. “Mo [Compito], Meredith [Whitten], Lara [Gartner] – all three did really well. And Laoise O’Driscoll in her first WPL season and third game at flyhalf is getting her groove on.”

Chou also singled out forwards Craig and Kimberly Knipe for continuously strong carries throughout the match.

“We really knew we could be very productive in offense,” Chou said of the season’s first win. “We scored one try in the last match [against New York] but we knew we could put some points on the board, so it was really good to see that at home. If we really work on adjusting to what [head coach] Phil [Thiel] wants us, then we’ll put up some good numbers.”

ORSU hooker Paris Hart scored on either side of halftime, while Molly Luft added a conversion, and the scoreline sat at 34-12 into the fourth quarter. That’s when the Surfers sent outside center Jordan Gray, Roth and Miano in for tries (49-12) to put the game out of reach. ORSU had the final say when flanker Rachel Johnson scored in the 76th minutes.

“I think the biggest thing that helped us with the win [Saturday] was the support after line-breaks and playing quickly off the rucks,” explained San Diego outside center Deven Owsiany. “We have a very strong pack this year that is able to win clean ball, and our defensive lineouts [Saturday] won us a lot of ball back.

“Hunter [Griendling] has been a great addition to the team this year. She reads the field well, distributes when she should and takes the gap whenever she has the opportunity,” the Eagle added. “The team is feeling very excited after the last two wins. We have had consistent numbers which has been key to us to play full scrimmages and critique the little things. I’m not sure what’s in the air but we keep getting new people out to practice and it’s amazing to see so many people wanting to play.”

Glendale has good numbers, too, and showcased as much when it traveled to Berkeley with two squads for two games. The Raptors may have shut out the All Blues to begin the day, but it took nearly 18 minutes to score on the hosts. Wing Justine Wypych, who earned Player of the Week during round one, scored the first of her three first-half tries to light up the scoreboard. Eagle flanker Joanna Kitlinski scored as well, while Hallie Koeppen added a conversion for a 22-0 halftime lead.

The WPL enjoys a bye week and results next weekend. For schedule and standings information, click here.