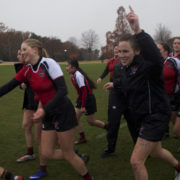 The matchup was a rematch of the 2015 Final on John Roberts Field, which propelled the Panthers to the National Championship title game held earlier this May. Davenport survived a slugfest of a Semifinal against Vassar College Saturday, while Winona State breezed by Coast Guard Academy.

“Yesterday we didn’t have our greatest game,” Panthers outside center and AIG Women’s Collegiate All-American Danielle Ordway said of the battle with the Brewers. “The coaches said they couldn’t teach us any more – it was about heart and what we know. We already knew it, we just needed to bring it together and that’s what we did today.”

Flanker Hannah Garcia kicked off the match with a first-minute try, taking the ball from Davenport’s lineout win behind its own 10 through the gain line and to the posts for a 7-0 lead. Scrum half Olivia Ortiz displayed the poise of a veteran as a freshman in an important position in the team, and scored herself a try in the 16th minute. No. 8 Hunter Moreland took the ball from a five-meter scrum over a defender, and Ortiz saved the ball from the breakdown and took it over the line through several defenders for a 14-0 advantage.

The Panthers’ dominance in the set piece was a major storyline in their win Sunday, as was the strong play of a forward pack made up of three seniors and two freshmen.

“They stayed low,” Ordway said of her teammates up front. “Probably the best scrummaging we’ve had all year.”

Ortiz received a yellow card 10 minutes from the halftime whistle for repeated infringements, but Winona State continued to struggle with the Davenport defense even with the player-advantage. The Panthers kept the Black Katts from doing any damage during the sinning, and fly half Hannah Tennant patiently padded the lead with two penalty goals for a 20-0 lead at the break.

The Panthers were not fazed by Tennant’s missed kicks in the second half, though Ordway did take tee duties late in the final quarter. A penalty goal pushed the score to 30-0 before Garcia replicated her first-half try with a lung-busting run to bring the score to 37-0 at full time.