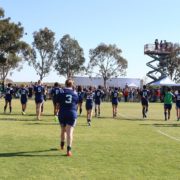 The team will attend a Send-Off Dinner hosted by USA Rugby Trust and Scion Restaurant in Silver Spring, Md., prior to the jaunt across the Atlantic Ocean at the end of July. Thanks to the sponsorship of Irish Rugby Tours, the Eagles will assemble early at University of Limerick ahead of the transfer to UCD. American supporters still seeking travel arrangements to follow the Eagles can book Official Packages via Irish Rugby Tours.

“We are very excited about the send off in DC,” Steinberg said. “We are meeting the USA Rugby Congress, we have a reception at the Irish Embassy, and we have a couple of practices planned. The support from Scion and USA Rugby Trust has been great. I have to recognize George Hook and Irish Rugby Tours who have been instrumental in helping our World Cup preparation.”

Capped half backs Kayla Canett, 19, and Annakaren Pedraza, 20, will attend their first major tournament alongside experienced playmakers Deven Owsiany and Kimber Rozier as the youngest players in a squad of an average age of 27 years. Forwards Katy Augustyn (26) and Stacey Bridges (28) lead the way in National Team appearances, with the players combining for 245 caps. Forward Nicole James and Rio 2016 Olympic Summer Games representative Jessica Javelet are the only two players without caps.

Tiffany Faaee captained the team against 2014 runner-up Canada in this year’s two-match Can-Am Series, and is one of 11 athletes to have played in the most recent WPL season. Hope Rogers, one of San Diego Surfers’ six Championship-winning players selected, has returned from an injury sustained following a debut on the HSBC World Rugby Women’s Sevens Series circuit to strengthen the front row, as well.

Fourteen of the women selected made at least one appearance on the Series during the 2016-17 season, including top scorers Alev Kelter and Naya Tapper. Women’s Eagles Sevens Head Coach Richie Walker connects the programs as one of Steinberg’s assistant coaches, having worked with most of the athletes at the Chula Vista Elite Athlete Training Center in Chula Vista, Calif., in recent months.

Though there were only three years between the seventh and eighth World Cups, the Women’s Pathway has afforded players plenty of opportunities to grow into World Cup-eligible selections. Following the reinvigoration of the National All-Star Competition and more competitive play for the AIG Women’s Collegiate and Junior All-American and Girls High School All-American powered by Atavus teams, the Eagles have debuted 34 internationals since the start of 2015. Eighteen of those players are included in the 28-woman roster for Ireland.

“With an experienced squad in 2014, we knew we had to get younger for this World Cup,” Steinberg said. “The shortened cycle has made getting so many players the experience they need challenging. This is a group that will need to grow through the tournament to be able to play at our top potential. It is exciting, though, to see so many players going to Ireland that will be eligible in 2021.”

Steinberg’s staff is bolstered by the additions of former World Cup Eagle Liz Kirk as a forwards specialist, experienced strength and conditioning professional Ian Gibbons, Richard Ashfield as a skills coach, and a highly capable team of physicians and physiotherapists tasked with keeping the Eagles at their healthy best through a grueling three-week tournament. The staff will work in tandem with ranging availability during the World Cup, as not all members of the coaching team will be in the assembly simultaneously.

“I cannot say enough about the commitment of our staff and the work they put in,” Steinberg said. “Our goal is always to provide the same support for the women that the men get at their World Cup and I think we have been able to do that.”

More information regarding the U.S. broadcast of Women’s Rugby World Cup 2017 will be announced in the coming weeks. To learn more about supporting the Eagles’ journey to the World Cup, please click here.