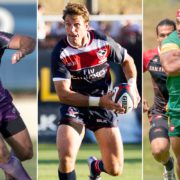 Created prior to the Summer Series, where Mitchell’s Eagles nearly upset Tier One Italy before shutting out Russia in northern California, the EETS and EDTG began as a way to better track athletes competing around the world in the build-up to national team assemblies, increasing the accountability around strength and conditioning and skill set needs.

Of the 50 athletes named in the second EETS of 2016, 43 were part of the first EETS, and 29 were originally called into camp for the Summer Series. The Training Squad also includes eight Olympians representing Team USA in the Rugby Sevens competition at the Rio 2016 Olympic Summer Games next week. Fifteen players in the inaugural PRO Rugby competition, another 10 playing professionally in overseas competitions, and 16 athletes in residency at the Olympic Training Center will be vying for spots in Mitchell’s Fall Tour squad.

“We are excited and happy to announce our latest Eagles Elite Training Squad and Eagles Development Training Group for individual preparation ahead of our third assembly window of the year,” Mitchell said. “We are getting to a stage where we can benefit from continuity in having the majority of our squad continue on from assembly to assembly, adding some new players that are now becoming available, which strengthens our talent pool.

“All players will receive their individual strength and conditioning programs from Chris Brown and his team, aligned to their rugby development plans with the view for them to take ownership in improving their capacity to meet our standards.”

PRO’s Denver Stampede and Ohio Aviators battled for the league championship over the weekend, with eight members of the EETS split evenly among the leaders. Nineteen-year-old Hanco Germishuys, one of five PRO representatives in the EDTG, is also with the Championship-winning Stampede, which lost Ben Landry early in the season to an NFL tryout in Seattle.

Four of the seven newcomers to the EETS have improved their standing in the national team setup playing in PRO. Shaun Davies, initially capped by the national team in 2013, has worked his way into the EETS with a positive campaign in Ohio. Sacramento Express’ Langilangi Haupeakui benefitted from the professional competition in June, earning a call-up to Eagles camp and the bench for the team’s match against Russia to receive his first cap. The loose forward built on his international duty with a Man of the Match performance for the Express two weeks afterwards and has been named in the EETS.

“We are still limited in depth in a couple of key positions, but for the most part competition for spots continues to increase,” Magleby said. “There are a bunch of players just under the EETS that, fairly soon, should be putting pressure on this current group.

“A big part of that is PRO Rugby’s efforts transitioning domestic amateurs into full-time professionals. That is not an easy evolution for many but we are starting to see the improvements in skills under pressure, conditioning, and match maturity thanks to PRO’s sustained work over the last few months.”

Nate Augspurger and Stephen Tomasin came from the Sevens setup to make their international debuts during the Summer Series once the HSBC World Rugby Sevens Series had ended, joining a list of Sevens stalwarts including Danny Barrett, Andrew Durutalo, and Zack Test that have been capped in the two forms of rugby union. Augspurger, as well as Martin Iosefo and Shalom Suniula, were named as traveling reserves for Team USA at Rio 2016.

Durutalo and Will Holder were also part of the Summer Series assembly, with Holder making his first international appearances since 2012. After starting three of the Eagles’ four matches at Rugby World Cup 2015, Durutalo turned his attention from Sevens to 15s with Super Rugby’s Sunwolves before returning to the Olympic Training Center last month to earn an Olympic place with Team USA.

“We’re lucky to have Brown and Mike Friday, and the facilities of the Olympic Training Center, for our Sevens athletes to train full-time,” Mitchell said. “We have seen the dynamic impact the Sevens players have made on our training environment and in test matches, and are ready to integrate them into our setup for important matches against the Maori All Blacks, Romania, and Tonga.

“On behalf of the 15s group, we wish Mike, Madison Hughes, and the rest of the team the best of luck in Rio.”

More information around the Eagles’ November schedule will be released in due course. Tickets for the match against the Maori All Blacks, part of “The Rugby Weekend Presented by AIG” in Chicago, are available via Ticketmaster from $22, with less than 25 percent of tickets remaining.