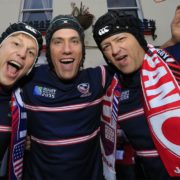 KYOTO, Japan – Two years out from Rugby World Cup 2019, World Rugby and delegates from unions around the world – including USA Rugby Chief Executive Officer Dan Payne – are in Kyoto for the tournament’s official pool draw. The draw will commence Wednesday, May 10, at 4 a.m. ET.

Though the USA Men’s Eagles have not yet qualified for the ninth championship event – their attempt to solidify a place in Japan will come this summer in a two-match series against Canada for the Americas 1 position – the draw will place the 12 already-qualified nations and remaining eight regional and repechage seeds into four pools.

[su_attention url=”http://www.rugbyworldcup.com/pooldraw/wheretowatch” text=”FIND OUT WHERE TO WATCH THE RWC2019 POOL DRAW”]

The host nation for the tournament would normally receive an automatic bid, but Japan’s third-place finish in its shared pool with the U.S. in England in 2015 qualified the Land of the Rising Sun for 2019 by virtue of a top-three finish in said pool. Defending World Cup champion New Zealand, Argentina, Australia, England, France, Georgia, Ireland, Italy, Scotland, South Africa, and Wales qualified in the same manner.

Those qualified teams have been placed in three bands, based on World Rugby’s rankings, to be drawn across the four pools. Once pools A, B, C, and D have three nations each, top qualifiers from the Africa, Americas, Europe, and Oceania regions will be drawn from the fourth band. The winner of the June 24-July 1 Americas 1 Qualifier between the Eagles and Canada will be included in this band. The loser of that Qualifier series will play for the Americas 2 spot, which is included in the fifth and final band along with Oceania 2, a play-off winner between Europe 2 and Oceania 3, and the winner of the global repechage.

The Eagles have beaten Canada in their last five meetings with the border rival dating back to a June 2014 victory. That win was the first for the U.S. in the matchup since July 2009 in a Rugby World Cup 2011 Qualifier, though Canada would go on to claim the Americas 1 seed for that tournament. Of the eight previous World Cup cycles, the Eagles have not been seeded higher than Canada (or fellow Americas nation Argentina) in any qualifying process.

The U.S. will prepare for its Qualifier series with matches against No. 4 Ireland and No. 12 Georgia – in bands one and three, respectively – as part of this June’s Emirates Airline Summer Series. Kicking off at Red Bull Arena in Harrison, N.J., June 10 and following on to Fifth Third Bank Stadium at Kennesaw State University June 17, the Emirates Airline Summer Series will be the first international rugby played for John Mitchell’s Eagles since they won the second annual Americas Rugby Championship earlier this year.

The summer will culminate in matches between the North American rivals at Tim Hortons Field in Hamilton, Ontario, June 24 and University of San Diego’s Torero Stadium July 1. Only one victory would technically be required for either team as the winner of the Qualifier series will be determined by the aggregate score line of the two tests.