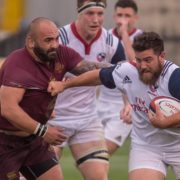 LAFAYETTE, Colo. – The November international test schedule for the Men’s Eagles National Team and October competition for the USA Selects ‘A’ squad have been confirmed by World Rugby.

The Eagles, most recently seen handing Canada its largest defeat in the border rivalry in a successful Rugby World Cup 2019 qualifying campaign, will travel to Georgia and Germany for two international matches against the European competition. While venues are currently being confirmed, Frankfurt and Tbilisi will be the host cities for the Nov. 18 and Nov. 25 tests, respectively.

The Nov. 18 match will be the first between Germany and the U.S. at the senior test level. The Germans are .500 through six matches in 2017, a record that includes a loss against the Georgian Lelos and a win against No. 15 Romania, the latter being the highest-ranked team Germany has beaten in modern times. Germany’s sevens side only missed core status qualification for the 2017-18 HSBC World Rugby Sevens Series by a lone defeat in the Qualifier Final.

For the second time in five months and sixth-ever clash, the U.S. will line up against the 12th-ranked Lelos. During the Emirates Airline Summer Series in June, Georgia left Fifth Third Bank Stadium at Kennesaw State University with a narrow, 21-17, victory. In two matches in Georgia, the teams have split results, with the Eagles winning the 2013 matchup in Rustavi.

Both matches will be broadcast live to viewers in the United States on The Rugby Channel. Venues and kickoff times will be confirmed at a later date.

The USA Selects, a developmental team for the Men’s National Team that does not award international caps for selections, will play three “A”-level matches in Uruguay in October as part of the second year of the Americas Pacific Challenge. Match dates are scheduled for Oct. 7, 11, and 15. More information will be released by World Rugby in due course.