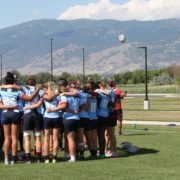 LAFAYETTE, Colo. – The Women’s Eagles, to be coached by Peter Baggetta for the duration of their upcoming tour, have been selected for the two-match November Tour in France 10 months from Women’s Rugby World Cup 2017. Atavus has been signed on as the official tour partner for the Women’s Eagles.

The team is scheduled to leave for Montpellier – where the second match against the No. 4 team in the world is to be played – Thursday, Nov. 17, five days prior to the first match day in Béziers. Both matches of the tour will be broadcast live on The Rugby Channel to subscribers.

“The pressure’s going to be on all of the coaches and all of the players to perform,” Baggetta said. “The pressure to perform is going to be magnified by the fact we have to play fourth-ranked France in France. The expectation is we’re going over there to compete and to perform. If we don’t perform, we’ll have to look at what we have to do, what changes we need to make going forward into 2017.”

Six veterans of Women’s Rugby World Cup 2014 will return to France with the U.S., which finished the seventh edition of the international competition in sixth place. Kate Daley captained the Eagles from the starting XV in three matches before her World Cup campaign was halted due to an injury, and is back with the national team having helped Old Blue of New York to a runner-up finish at the 2016 USA Rugby Emirates Airline Club 7s National Championships.

Katy Augustyn, Sylvia Braaten, Hope Rogers, and Kimber Rozier each played in at least three of the team’s five World Cup matches in France, and started the Eagles’ match against France at this summer’s Women’s Rugby Super Series. The Women’s 6 Nations Champion won the matchup in Utah, where the international event also included WRWC 2014 Finalists Canada and England.

Rogers – one of the youngest athletes at the tournament in 2014 – and World Cup traveling reserve Sam Pankey were named to the first Women’s XVs Residency program earlier this year along with 2016 Women’s Premier League Most Valuable Player Jordan Gray. The three won the WPL Championship last weekend with the San Diego Surfers, and are included in this month’s travel squad.

Twelve members of the squad were in Marietta, Ga., for the domestic championship event, while eight others – from Pennsylvania State University’s Tess Feury to Seattle Saracens’ Kelsi Stockert – have played in a National Championship game in 2016. Kimber Rozier and Jess Wooden spent time with England’s professional Aylesford Ladies this summer, and nearly half of the team has been in a full-time training environment with a National Development Academy or the Women’s Eagles Sevens in Chula Vista, Calif.

“The key thing for us this tour is going to be competition,” Baggetta said. “We want players to compete; play against themselves, play against the player they were yesterday, and competing against each other at their positions. In France, we’re going to find out who can compete and who struggles to compete.

“That drove some of our selections decisions, too. If you’re not playing any rugby and show up to play against France – in France, which is one of the most difficult places to play to begin with – it’s hard to be prepared for the type of physicality and that type of onslaught.”

In addition to the group of World Cup veterans, 20 members of the touring squad attended at least one of the Super Series events between 2015 and 2016, with 13 selected for both. The coaching staff has identified continuity in the team as a factor for success – importantly in a three-year window between World Cups – also allowing for the introduction of new players to the setup.

“One of the lessons we learned from the previous cycle was chopping and changing players constantly – and that lack of stability – hurt us a bit,” Baggetta said. “We made a conscious decision to get our athletes playing as much together as much as possible. That doesn’t mean there won’t be players that force themselves onto the squad, but we’re going to be pretty consistent going forward.

“If you don’t have continuity, you have this massive turnover and either you have a lot of new players coming in or you can’t bring in as many new players. The other nice thing about the setup now is the close relationship the 15s program shares with Richie Walker and the sevens program. Richie’s input was really valuable to us, understanding who could transition to 15s and in a short time frame.”

Baggetta has coached with the Eagles – and alongside Head Coach Pete Steinberg, who is on personal leave during the duration of the tour – for several years, including at the 2014 World Cup, and has worked with young players at National All-Star Competitions to adapt to the requirements of the senior international test level. To better prepare himself and the players for the dynamic expected on the November Tour sponsored by Atavus, he took the head coach role for the Eagles’ final match at this summer’s Super Series.

France won the 2016 RBS Six Nations Championship at the beginning of the year, beating reigning World Cup Champion England and three of the other four top-ranked nations in the competition. Most recently, France completed the season double over England Wednesday, Nov. 9, in preparation for the Eagles’ visit.

“We’re deeply committed to providing young women a pathway to allow the game to take them wherever they want to go in life; whether that is to college, the World Cup, or the Olympics,” said Julie Prentice, co-founder of Atavus. “This tour is a critical opportunity for these elite athletes to test themselves as a team and individuals against the best in the world, preparing them for the World Cup and life beyond.”

The Rugby Channel will broadcast both matches of the Women’s Eagles’ November Tour live to paid subscribers, with Atavus signed on as official tour sponsor. For more information and to subscribe, visit The Rugby Channel or download the iOS or Android smartphone applications. The Rugby Channel is also available via streaming video services Roku®, Apple TV, and Chromecast.

Atavus is an ancestor or ancestral type from which a character is assumed to be inherited.

Headquartered in Seattle, Washington, Atavus Rugby is relentlessly driven to breed character, develop skills and champion Rugby in the USA and beyond. The company builds and executes sustained, progression-based programming that provides coaching inclusive of any age, skill set or gender. Programs include the year-round Atavus Academy, the USA Rugby Academy Powered by Atavus, customizable “Powered By Atavus” consulting services, and international programs with key partners such as Bermuda Rugby. More information on upcoming Atavus programs is available at atavus.com.